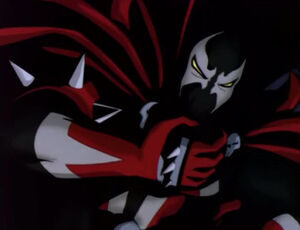 In New York City, Cogliostro explains 400 years have passed since the last Hellspawn. He explains the battlefields have changed but the human soul is always the focal point of the battle.

Two reporters head down a seedy alleyway to met a Mr. Stevens based on a lead they were given. Suddenly Mr. Stevens is shot down by several gunmen. They are asked who else knows the information they were getting from Stevens. They are then held at gunpoint themselves and shot down by the assailants. A car pulls up with a briefcase and lighter fluid.

Spawn watches over from the rooftops above. He jumps down and tells the attackers to let the man go. When the men resist, Spawn attacks them and disables them with ease. When the man he saved freaks out and holds the gun on him, he shoots and a flame from the gun lights him on file, killing himself.

Seeing the flame, Spawn triggers several flashbacks to how he was murdered alive, Wanda Blake, and the Clown.

The Clown appears in the alleyways and makes several joking remarks as he walks around Spawn. He calls him by his name, "Spawn" and Spawn is confused as to what happened. He can barely remember dismembering the men as he looks at their mangled and charred bodies. The Clown applauds him and tells him it's a reaction and a gift. Spawn passes out after another flashback.

Several hours later, Bobby the Bum and Gareb the Bum find Spawn passed out in the alley. Spawn mutters the name, "Wanda" and knows he was married to her. The bums offer to help but he stumbles away. He runs into Cogliostro who warns him, "we all want to go home, my friend... but it's war getting there."

Sam Burke looks over the murder scene and recognizes Mason as a high-profile mobster. Twitch Williams acts humble and warns him to protect the crime scene as Sam sloppily consumes donuts over the dead bodies. Sam orders Twitch to find a connection between the journalists and Tony Twist's dead mobsters.

In Queens, New York, Spawn stops by his old house. He spots his best friend, Terry Fitzgerald, leaving his house. Seconds later, Wanda Blake and Cyan Fitzgerald come out of the house to kiss their daddy goodbye. Spawn is shocked that his wife has remarried with his best friend.

Cogliostro thinks about how there's always an agonizing price to watch hellspawn see what happened with their lives. He thinks about how Hell's plan is always to keep them confused, so they don't get caught up in personal goals.

The Clown shows up and teases Spawn about how he couldn't have children with Wanda and how his best friend is now sleeping with her. Violator reveals he's been dead for five years and only now returned. He explains he's really dead and that Hell has a plan for him. Spawn walks away in anger.

That evening, Spawn heads to the cemetery and begins digging up his grave. Cogliostro thinks about how every Spawn laments finding out they are dead and they always head to verify the information, hoping it is all just a nightmare. Spawn experiences another flashback about his time in service and his marriage to Wanda. He remembers his deal with Malbolgia to return to earth to see his wife in exchange for his soul.

Jason Wynn talks with Tony Twist on the phone about how his three hitmen were killed. Tony thinks the kill was too clean and accuses Jason it was one of his men. As he hangs up the phone, Wynn makes a call to tell him the informant has been taken care of. Senator Scott McMillan tells him he will receive unlimited funding for his assistance.

Elsewhere, Police officers pull of Officer Hector from Internal Affairs. Spawn appears and surprises the officers. He is shot in the process and his Necroplasm heals the gun wounds.

The Clown watches and is excited to see Spawn become violent and angry.

Retrieved from "https://imagecomics.fandom.com/wiki/Todd_McFarlane%27s_Spawn_Season_1_1?oldid=30538"
Community content is available under CC-BY-SA unless otherwise noted.