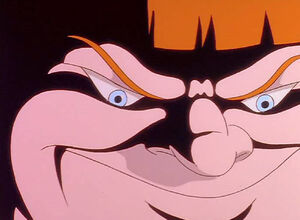 In a quiet New York suburb, a familiar jingle can be heard as an ice cream truck rolls into town. Billy Kincaid lures a small child into his vehicle.

In New York City, Kincaid drives into town. Spawn is followed around by Gareb. He becomes slightly annoyed at Gareb's friendship offers and thinks only about Wanda Blake. When Spawn reveals his face to explain why Wanda wouldn't take him back, Gareb accepts him and tells him he shares what he has and will welcome him when he's ready.

The bums talk over a fire about Spawn. Some of them think he's dangerous and looks like a vampire. Spawn overhears and walks away. Suddenly, a speeding car roars into the alley. Three mobster pop out and threaten them. They want to know who killed Tony Twist's men the other day. When the bums don't know who killed them, they are murdered. As the mobsters turn towards the last group of bums, Spawn returns and takes out the men. He leaves on alive, and orders him to tell his boss the alleyways are now out of bounds and under the control of Spawn.

The bums approach Spawn as their savior and Spawn finally tells them his real name of "Al".

Tony Twist gets a call at midnight telling him what happened to his men. He decides to call in his ringer, Overkill.

The next day in Queens, New York, Wanda Blake is leaving for work at the same time as Terry Fitzgerald. Terry notices she looks frazzled for her new case. She tells him the case is for Kyle Watson, a child killer

That evening at the Central Intelligence Agency Headquarters, Senator Scott McMillan meets with Jason Wynn. Jason tells him he has to run for president. Wynn threatens his family, including his son Billy.

Sam Burke and Twitch Williams arrive in the alley to investigate the new murders. They discuss how Stevens had dirt and they haven't figured out the connections yet.

Twist meets with Overkill, where he's instructed to take out the man who took out his mobsters.

Spawn sits on a church when Clown approaches him again. He tells him it's time to get ready to start killing people. When Spawn refuses, the Clown turns into his true form as the Violator. He begins speaking to Spawn through Telepathy. Spawn lashes out and shoots the Violator but he heals just as fast as Spawn did earlier.

Violator tells him that Malebolgia selected him to be one of his warriors. He must not rely on weapons and he doesn't think he was ever worthy. After knocking him down, Violator walks away telling him that was a friendly reminder.

Spawn wakes up with Cogliostro standing over him. Cog tells him he needs to use his power more sparingly. He tells Spawn a war is raging on with Heaven and Hell, and that Spawn is on the frontline. He tells him to start paying attention and stop killing without thought. He's only strengthening the devil.

Retrieved from "https://imagecomics.fandom.com/wiki/Todd_McFarlane%27s_Spawn_Season_1_2?oldid=30858"
Community content is available under CC-BY-SA unless otherwise noted.