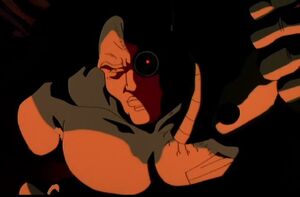 Episode Title
"No Rest, No Peace"

Appearing in "No Rest, No Peace"

Synopsis for "No Rest, No Peace"

In a dark alley, Overkill shakes down a bum for information on who attacked Tony Twist's men.[1] The bum tells him to check out Rat City. Overtkill rips the mans arm off and draws on the walls with his blood upon receiving the information.

Spawn (Al Simmons) climbs the church once again, but is not sure why is drawn to that spot. He sees a gathering of bums, an sees a message, "Hero, Midnight, I'll be waiting" written in blood on the wall. A sudden explosion occurs, an Overkill says it's midnight in Nairobi so it's close enough. He lifts up the stunned Spawn and throws him around.

Finally coming to his senses, Spawn's instincts kick in and avoids the onslaught of bullets and missile salvos from the cybernetically enhanced Overkill. Upon jamming a lead pipe into Overkill's eye, Spawn escapes into the smoke fumes of the battle.

Cogliostro watches on and thinks about how each battle brings him closer to coming back to Hell.

Spawn heads to an army base depot, ripe with weapons and explosives. He stocks up on equipment to help him in his battle. He experiences flashback of his service and is confused to their meanings. He triggers an alarm and is attacked by the responding U.S. Army military. He uses his Necroplasm to teleport out of the facility instead of fighting the men.

Bobby the Bum and Gareb find Spawn after his teleportation. Bobby is filled with hatred and mistrust, while Gareb wants to help and take care of Spawn. Spawn stands up and recovers.

Spawn shoots his way into the facility that is repairing Overkill's eye.

In a garage, Gravano walks towards his car and yells at his men to find Overkill. As he opens the door Overkill's in pieces in his car. Spawn appears and warns him to stay out of his way and alleys.

The next day, Wanda Blake walks into her law office where she works. One is Kyle Watson, an accused child-killer. Wanda tells her secretary to reschedule her 3:30.

At Ryker's, Wanda meets with Kyle and finds he is acting strange and she must speak slow. He is high on drugs due to his treatment. She reports that the drugs should have kept him impotent and take several months to exit his system. However, the cases show the daughters were sexually assaulted. She thinks she can keep him off of death row with this evidence.

At home, Wanda and Terry Fitzgerald talk about the case. Terry tells her he's following up on Central Intelligence Agency reports and will follow her to bed soon. Outside the window, Spawn watches as his wife heads to bed with his best friend.

At a strip club, Chapel sits in the shadows drinks the night away. When he receives a page, he heads to the bathroom and kicks the patrons out to make a phone call. He speaks with Jason Wynn on the phone. Wynn tells him about a job tomorrow. Chapel grabs one of the strippers and takes her home with him.

As they engage in sex, he has flashbacks to when he served in the army. He begins crying and apologizing remembering the hundreds of dead bodies he was standing over.

Billy Kincaid cleans up his blood equipment as a news report lists that evidence was planted to incriminate recent murderers.

Clown laughs as he watches Billy head out to 'work'.

Retrieved from "https://imagecomics.fandom.com/wiki/Todd_McFarlane%27s_Spawn_Season_1_3?oldid=30857"
Community content is available under CC-BY-SA unless otherwise noted.