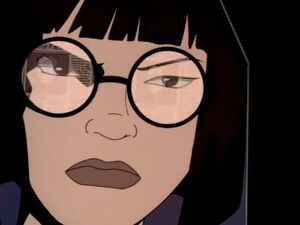 Jason Wynn and Merrick discuss the fallout from the recent attack.[1] They don't think Terry Fitzgerald could have done all the damage by himself. He suddenly gets a call from Chief Banks that he's pulled in Wanda Blake for questioning. He tells him the Terry must be near. He orders Banks to release her and search for Terry. Merrick requests to go after Terry by herself.

Spawn freaks out about how he scarred Wanda. He begins stabbing himself as Cogliostro watches in disappointment. He tells Spawn he doesn't know what's going on and that his fate is malleable. He tells him he's not the only one to have gone through this experience.

Elsewhere, reporter Lisa Wu pulls up old news articles on missing persons. She prints out a picture on Billy Kincaid and Wanda. She decides to talk to Wanda for more information.

Meanwhile at the New York City Police Headquarters, the cops receive a debriefing and see the pile of dead bodies building up in the alleys.

As Terry walks through the alleys, he's stopped by two inquisitive officers. They arrest him when they find out he doesn't have an ID and make call saying they might have found, 'him.'

Lisa Wu heads to the alleys where she asks the local bums for information. She asks how all the recent murders occur in Rat City and Bobby agrees to show her something interesting. They show her a gun that Spawn stole from the warehouse.[2]

Wynn calls Wanda and tells her he's going to place some of his men outside her house to help protect her. Spawn easily breaks in and tucks Cyan Fitzgerald as she slumbers. He stands over Wanda contemplating whether he should wake her and tell her truth, but lets her sleep instead.

Suddenly a man to her apartment. When he is about to shoot Wanda, Spawn disables the man. Spawn is stabbed and oozes Necroplasm in the process as he snaps the man's neck. Wanda continues to become terrified of Spawn and runs away to call the police. Spawn follows her and tells her that he's her husband. Cyan walks in and asks why he's making her mommy cry. As Wanda sobs, Spawn disappears into the shadows. As she looks up and sees Cyan standing there, she comforts her. Cyan tells Wanda that was the 'sad man' that saved her.[3]

Retrieved from "https://imagecomics.fandom.com/wiki/Todd_McFarlane%27s_Spawn_Season_2_5?oldid=31440"
Community content is available under CC-BY-SA unless otherwise noted.