"This One Last Job" 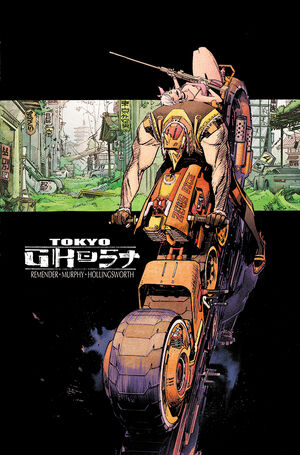 Behold-- I am the Jesus of Murder!

Appearing in "This One Last Job"

Plot Synopsis for "This One Last Job"

In 2089 Los Angeles, Debbie Decay thinks about how things used to be. She recalls the canals used to be places she would swim as a child. Now they are are a cesspool-filled nightmare where people drown and burn in the acidic waters. People crowd around technology to listen to the music or distract themselves from reality. She tells herself this will be her last job.

A man named Ralphie runs through the walkway area of the canals. He pushes others callously into the water as he frantically frees from someone. Decay thinks to herself that this will be her last job for what she's been wanting. Led Dent flies by on his motorcycle and plucks Ralphie from the street by the collar. Decay thinks about how Led is a constable, a worker for the Flak Corporation that protect the ratings. Dent is nano-juiced and obedient. He's also incredible strong and responds to any commands given to him due to his nanojac receivers.

As they pull Ralphie in tow at high-speeds down the street, Decay asks him where his boss is located, Davey Trauma. Decay wants Davey as the real power behind Ralphie. Davey recently killed thousands of people with no reason in tact. Ralphie replies lewdly that he won't help them find Davey and Led Dent slams his face against a wall as they continue driving. Ralphie's face scrapes against the bricks and rips off his flesh and eyeball from socket. Suddenly, Ralphie's voice changes. Davey has taken control over him as he can with anyone who is nano-jacked.

Decay is abhorred as Davey taunts her, reminder her he could take possession of Led anytime he wanted. She gasps as she thinks about all the time she's spent watching her loose her husband, Led, to technology and becoming nano-jacked. She has Led throw Ralphie to a ravenous group of homeless who rip him apart for food. She thinks about how he's the last of the straight-edge, those who rejected the Nanopacs and lives a technology free life. She knows with Davey living in the internet and able to hack any Nanopac, she needs to free Led from his control. She's fed up with the nano-bots inside him, releasing mind-altering chemicals, and gets off the bike.

She heads into a Death Race Stadium where she asks the bartender, Jim-Jam, if he's seen any other constables. She bargains to give him mind-altering chemicals for the information. She then heads to talk with a bouncer, Bingus, and pays him with drugs as well to be allowed to pass by.

She enters an underground gambling facility. Any vice including cloning and incest, are available at a price. As she was promised, she finds constable Gristle sitting in the back of the facility. She ducks behind a pillar and attempts to call Led in as backup. Suddenly, Davey Trauma steps around the corner and overhears her conversation. He sends his nano-jacked lackeys after her as she flees the scene. As she escapes in the crowd, his lackeys act as his voice and chide her for trying to be a good cop. He taunts that she'll loose Led the same way she lost her father, into technology.

Suddenly, Led breaks through a wall and lands his bike on on of Davey's men. Davey jumps into a racing vehicle on the track below. He ejects the driver and pulls out a gun. He tells Led he'll just attract another constable's attention as he goes on a killing spree. He fires a missile from the back of the vehicle and it explodes in the crowd, killing hundreds and opening an escape route.

Davey's lackeys meet up with Davey on their bikes outside the Death Race Stadium. He tells them to join him on a murdering spree. In a nearby town center, men pawn nanotech drugs to civilians with the promise of morphing their bones and physical appearance. Davey and his men rip into them and murder several civilians as Davey claims to be the, "Jesus of murder." As Led chases them, Davey takes control of his bike and flings Decay and Led off. His lackeys surround them and unleash a round of bullets. Led grabs Decay and turns his back on them to protect them. Decay announces he gets his nano from a needle, and injects him with adrenaline to cause Led to enter a berserker rage. They knock Davey down.

Led is still in a comatose state and unable to snap out of his virtual nano-bots. Decay pushes him down and strips her clothes off to sleep with him in the middle of the road. Afterwards, they lay there and she thinks about her plans to bring him to Japan. One of the last countries to have not plugged in with nanopacs. She wants to free him of his technological chains and return him to the man he once was, and who she loves.

The Isles of Los Angeles 2089: Humanity is addicted to technology, a population of unemployed leisure seekers blissfully distracted from toxic contamination, who borrow, steal, and kill to buy their next digital fix. Getting a virtual buzz is the only thing left to live for. It’s the biggest industry, the only industry, the drug everyone needs, and gangsters run it all. And who do these gangsters turn to when they need their rule enforced? Constables Led Dent and Debbie Decay. This duo is about to be given a job that will force them out of the familiar squalor of Los Angeles to take down the last tech-less country on Earth: The Garden Nation of Tokyo. Bestselling writer RICK REMENDER (BLACK SCIENCE, DEADLY CLASS) and superstar art team SEAN MURPHY (CHRONONAUTS, Punk Rock Jesus) and MATT HOLLINGSWORTH (WYTCHES, Hawkeye) examine our growing addiction to technology while thirsting for a nature we continue to destroy.

Retrieved from "https://imagecomics.fandom.com/wiki/Tokyo_Ghost_Vol_1_1?oldid=69073"
Community content is available under CC-BY-SA unless otherwise noted.