"The Human Race is Failing" 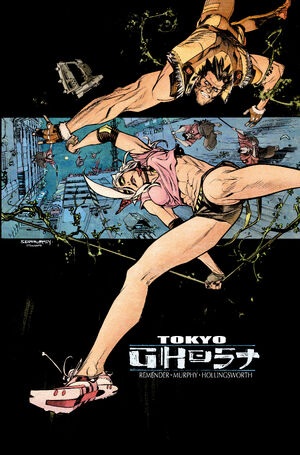 No one believes in love anymore. They say it's just a word to cover up a biological urge. But I do love you, Teddy.

Appearing in "The Human Race is Failing"

Plot Synopsis for "The Human Race is Failing"

Debbie Decay and Led Dent head to Flak Tower. They meet with multimedia business owner Flak. Debbie was planning on leaving after their last job and heading to Japan where technology has been outlawed. When Flak tells them their next mission will be in Tokyo, Debbie realizes he knew all along she was planning on escaping. He tells them their last task before he releases their contract is to find the ruler of Japan, kill him, and bring down the EMP system protecting the nation. He knows that Japan is untouched by technology and is full of supplies and materials the world needs. He sees them as greedy and wants to plunder their resources.

Debbie recalls being a young girl and watching her mother "jack-in" to TV and become engrossed in technology. Her mother didn't want anything to do with her. Debbie was just a distraction from her TV. Her father was a police officer, and one of the last generation of LAPD officers before they were shut down for private enforcers. Her father encouraged her to avoid technology and play outside to experience real life. Debbie knew the last thing she wanted was to end up like her father - attempting to pull someone from a technological addiction.

When her father passed away, she became bored and eventually found a young boy named Teddy Dennis who was addicted to technology. She pulled him from his Nanopacs and together the two grew up without technology. As they grew older they eventually fell in love. One day, they were attacked by a group of ruffians who were filming a reality show of beating people up and broadcasting it on the internet. Teddy wasn't strong enough to protect her and was beaten down while they filmed it. However, Debbie was also taught fighting skills by her father and used them to beat back the four boys. Everyone Teddy knew saw the actions and ridiculed him for being so weak and having to be saved by his girlfriend.

Due to the guilt of being too weak to protect his girl, Teddy joined the constable program and became Led Dent, one of the cities most notorious and strongest constable police force. As a result, he became jacked-in to the technology - something they had attempted to avoid their whole lives. Debbie realized she became exactly what she swore not to become, someone who was attempting to free a loved one from technology.

Debbie and Led headed to Japan, where they spent 9 days detoxing Led from his technology addiction. Upon arriving, a samurai spotted them and Led chased him so that he couldn't report their position. However, he was not fast enough as the samurai jumped a ravine that Led could not follow. Debbie came to the rescue and scaled over the gap to tackle the man. However, as she stood up she realized she stood face-to-face with a woman samurai and horde of Japanese warriors ready to attack her.

Constables Led Dent and Debbie Decay are given their final mission: purge their bodies of all technology and invade the Garden Nation of Tokyo.[1]

Retrieved from "https://imagecomics.fandom.com/wiki/Tokyo_Ghost_Vol_1_2?oldid=51940"
Community content is available under CC-BY-SA unless otherwise noted.