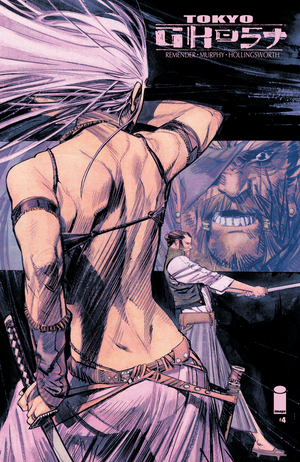 Nothing haunts a man like what could have been. No other ache follows you quite the same.

Debbie Decay wakes up while cuddling with Led Dent. As they get dressed, Mash and a gang of samurai surround them. Mash reveals it was his brother who had attacked and filmed Dent being beat up as a teenager. In return, when Dent became a constable he hunted down his brother and him. He nearly killed his brother and burned most of Mash's face off over a flame. Mash claimed that Dent was malevolent for enjoying the activity while claiming innocence for his actions being due to poor choices, but not evil.

Mash gravely injures Dent. Kazumi arrives and attempts to heal Dent. However, Mash stabs her in the back and rejects her ways of peace. Dent and Mash continue their scuffle and Dent smashes his face in with a rock. When Kazumi's guards show up, Dent realizes they'll blame him for Kazumi's death. He attempts to flee down a waterfall as arrows pierce him.

Led Dent finds his ship and pulls out drugs to get jacked-in once more. As he takes the drugs, Davey Trauma comes on the screen and welcomes him back.

Life in paradise is cut short for Led and Debbie, as a snake from their past seeks vengeance on the Constable.

Retrieved from "https://imagecomics.fandom.com/wiki/Tokyo_Ghost_Vol_1_4?oldid=52726"
Community content is available under CC-BY-SA unless otherwise noted.