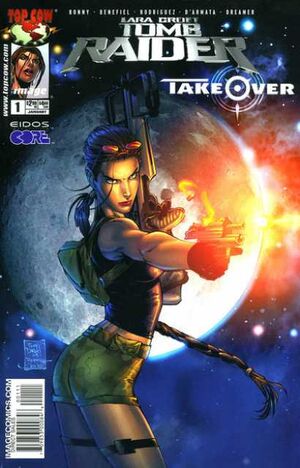 LA doesn't quite agree with me.

The museum becomes a target for an old adversary of Lara's named Edgar Mast who had brutally killed her 8-months pregnant friend Annie Richardson in a previous robbery. Lara had tracked him down to get revenge but he escaped.

Lara tries to escape with actress come-waitress Lizzy Zorka. Mast captures Lizzy and threatens to kill her unless Lara hands over the bracelet. Lara does this and Mast shoots at Lara. Lara plunges over a balcony and Mast assumes she is dead.

Now Mast has the stone in his possession the real reason for its possession becomes apparent. The Adelphi stone allows the wearer to use it in conjunction with the Oracle Altar to travel anywhere in the blink of an eye. Mast wants to use it to steal from any vault in the world, a portal begins to open in the middle of the altar.

Meanwhile Lizzy has helped Lara from hanging off the balcony and they plan to disrupt Mast's plan's.

Lara wears a mask and attacks knocking the Adelphi Stone out of Mast's hand. She catches it and throws it at the portal. The portal begins to collapse sucking in Mast and his men. Lara and Lizzy hold on for dear life.

Lara leaves the party telling the papparazi to speak to Lizzy about what has happened.

Retrieved from "https://imagecomics.fandom.com/wiki/Tomb_Raider:_Takeover_Vol_1_1?oldid=51802"
Community content is available under CC-BY-SA unless otherwise noted.