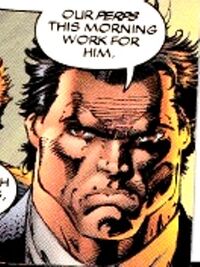 Tommy Costello is an American police detective from Manhattan, New York. He was a short-term ally of Cyberforce.

In Volume 2, Issue #9 of Cyberforce, Detective Costello became involved in the super-powered mutant struggle when he responded to an incident involving his partner Detective Alysande Morales. She rescued Chip and a mysterious girl named Miranda Tai from pursuing S.H.O.C. Troopers, fatally shooting the first S.H.O.C. assailant before being confronted by their field commander Ragland. Before he could attempt to attack Morales, Costello arrived and intervened. Ragland and his team were arrested briefly before their bosses--Watchword, a front for Cyberdata pressured police officials to release their people. Morales and Costello soon learned their days as policemen were numbered as Watchword and the city of Manhattan were in talks of privatizing certain police elements.[1].

Costello willingly took the brunt of verbal punishment by the Watchword representatives, despite his partner attempts to defend their actions in dealing with the S.H.O.C. troops. After the conversation at the police station, Costello and Morales both went to their homes. Costello however, woke up to find himself in a subway, assaulted by Velocity. After being left battered out on the tracks, in the path of an oncoming train, Costello watched his broken legs transform into cybernetic legs and powered his way out the path of the train. He repaid Velocity with a vicious attack of his own, killing her. Then he was ambushed by Ripclaw who was seeking revenge for Velocity's murder. Costello suffered a blow to his chest that cut away his flesh, revealing a body of steel underneath. He grew cybernetic tentacles with blades and ensnared Ripclaw, stabbing him through the heart. Costello soon discovered he was involved in CyberData's imprinting program, training him to become a S.H.O.C. operative. [2].

Costello would remain in the virtual world for a time. At one point in the virtual scenarios, he awoke in a meadow and met Ballistic[3].. Both of them soon realized they were part of another test cycle of the virtual programming. They found themselves on the run from Velocity who was programmed to kill them. However, the two were rescued by Risqué who hacked the system and delayed Velocity's speedy progress by programming every step made would double Velocity's mass, quickly turning her into an obese operative.[4]. By the end of Issue #11, Costello and others trapped in the virtual world of Cyberdata were freed by Risqué. Costello's last appearance was at a coffee shop where the team celebrated their victory over Cyberdata. The team jokingly offered Detective Morales a present in the form of the skin suit she wore in the virtual world as Risqué. After Costello jokingly told her to wear it with pride, Morales quickly replied in further jest that he ought to see the "sidekick suit" that was made just for him[5]. After this episode, neither Detectives Costello or Morales were seen or heard from again. It could be suggested that the two detectives resumed their work on the police force, with more or less focus on combating the Cyberdata influence in New York.

Retrieved from "https://imagecomics.fandom.com/wiki/Tommy_Costello_(Top_Cow)?oldid=55739"
Community content is available under CC-BY-SA unless otherwise noted.