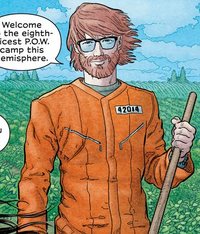 Only Yanks are dumb enough to die for their country. We live for it.

In 2112, Tommy witnessed the bombing of Washington, D.C. on TV. Shortly after, Ottawa was bombed. His parent died in the explosion and he was tasked to protect his baby sister.[1]

3 years later, Tommy and his sister encountered a homeless Canadian named Walchuck on a train passing through Manitoba. They told the man they were headed for Churchill, though the man told them they should go further up north. He then later recommended the two follow him on the next ship to Greenland.[2]

While crossing Manitoba, Tommy and his sister were surrounded by Americans in a cabin. Tommy hid Amber in a hidden tunnel in the cabin as he surrendered himself so Amber could get away.[3]

Tommy was held at a secure detainment center until 2124. He met Victoria McFadden after she had been captured and introduced himself. He informed her he had hacked glasses he kept hidden from the Americans and asks if she had been in contact with his sister. McFadden resists telling him information as she's concerned this may be another mind trick from the Americans. He gives her an Eat-More bar and tells her that her sense of taste will be dull in a sim. When she bites it and realizes he's a real Canadian, she regrets to inform him she may have signed her death warrant as she just revealed his sister's location to Ma'am. Tommy tells her it's not his sister he's worried about if she sent Americans after her.[4] Soon, Tommy and McFadden heard news of a small Canadian force attacking Ma'am and the US base. Tommy instantly knew it was Amber. When the group was successful in blowing up and contaminating the last clean source of hydro, the U.S. Troops retreated back to the United States and the Canadians were considered the victors of the war.[5]

Retrieved from "https://imagecomics.fandom.com/wiki/Tommy_Roos_(We_Stand_on_Guard)?oldid=52085"
Community content is available under CC-BY-SA unless otherwise noted.