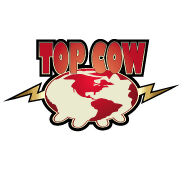 Top Cow Productions (TCP) is a partner studio of Image Comics founded by Marc Silvestri in the 1992. During Image's initial stages, Silvestri shared a studio with Jim Lee, where he created his first creator-owned comic, Cyberforce, as part of Image's initial line-up.

After setting up his own studio, Top Cow expanded into other comics, launching Codename: Strykeforce, a new Cyberforce series and various spin-offs. The company attracted various professionals known across the industry, including artist Brandon Peterson, writer Garth Ennis and former Marvel staffer David Wohl. It also helped launch the careers of various writers and artists, such as Christina Z., Joe Benitez, Michael Turner and David Finch. Turner and Finch have since worked for DC and Marvel Comics.

In 1996, Top Cow was briefly moved away from Image during a power struggle with Image associate Rob Liefeld, returning shortly afterwards, when Liefeld left the company. At the same time, Top Cow was abandoning superheroes and moving into a darker subsegment of the fantasy genre, with new properties Witchblade (where Turner had his first smash hit) and The Darkness (where Marc Silvestri returned to artist duties). Due to the success of Witchblade Top Cow began cashing in on Turner giving most to all books Turner variants, producing multiple "clone artists" and soon enough Top Cow began cashing in on T&A.

Due to the success of these titles, Top Cow, which was now functioning like a regular publishing company, launched a line of creator-owned comics, that included Turner's Fathom and Aphrodite IX. Unfortunately, problems with deadlines and royalties forced Michael Turner to leave the company, and Top Cow went back to focus on their chief properties. Silvestri tried the concept once more with a new imprint, Joe's Comics, created exclusively for J. Michael Straczynski, launching Rising Stars and Midnight Nation, but once again disagreements led to the imprint's demise.

Top Cow is also known for bringing Tomb Raider's Lara Croft to comics, with various graphic novels written and drawn by some of the industry's best known creators, including Dan Jurgens and Paul Jenkins and artist Andy Park. The cartoon Battle of the Planets is another licensed property where Top Cow has invested, thanks to the collaboration of cover artist Alex Ross.

In recent years Top Cow has suffered a number of setbacks. The loss of Turner and then the "Rising Stars" conflict negatively affected the company's PR. A number of titles were cancelled due to low sales. The Darkness, one of the company's flagship titles, was suspended due to low sales. In addition, the company suffered from inefficient TPB policies and erratic production schedules. Nonetheless, Top Cow still had a few successes, including the revitalized Witchblade and the acquisition of the City of Heroes license. In 2006, Top Cow made a business agreement to use several of Marvels licensed properties in their own series, with characters including Wolverine and the Punisher confirmed so far, appearing in Darkness/Wolverine and Witchblade/Punisher Crossovers. Also, as part of this agreement, several Top Cow artists are to provide art chores on various Marvel series, with Tyler Kirkham currently already completed a 2 issue arc for Amazing Spidermans Civil War issues 531 and 532. Top Cow also relaunched Cyberforce during this period.

On 2007 Top Cow Productions began the Pilot Season Initiative, which consisted on publishing pilot comic book issues showcasing Image characters who had potential for their own series.