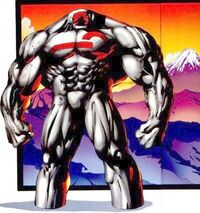 Toshiro Misawa, also known as Fuji, is a comic book superhero in the Stormwatch series, first appearing in Stormwatch #1. He has immense size and strength as well as the ability to control the density of his body granted by his containment suit. However, he is unable to control his molecular structure without it and he would revert into a radioactive cloud of plasma, possibly dying in the process without some other form of containment.

The nickname Fuji was given to him in high school, because of his extraordinary size and Japanese origin. He spent some time as a Sumo wrestler in his teens but developed a strange condition which caused his body's structure to deteriorate. His father, Yoshi Misawa, was a wealthy businessman and invested a lot of that money into curing his son but was told it was incurable. Stormwatch then stepped in to help. However, when his powers were fully activated, Fuji's body reverted to plasma and only quick thinking by Stormwatch scientists saved his life. Now, he is unable to live outside his specially built containment suit, a fact which affects him emotionally though he often hides it behind a cheerful exterior.

Fuji's containment suit has changed many times over the course of his Stormwatch duties. Despite inherent problems, such as his fingers being too big to operate communication devices, Fuji still enjoys bragging about how beautiful he considers himself to be.

Fuji once assisted the WildC.A.T.s, where rogue team-member Tao caused him severe mental damage by trapping him in a mental loop. It took some time to recover from this.

Fuji's deep patriotism is highlighted in Stormwatch #42 as he breaks protocol to personally confront a Japanese madman who is causing widespread death in Tokyo and beyond.

Fuji was killed when his containment suit was destroyed during an attack by Xenomorphs on Skywatch in the WildC.A.T.s/Aliens crossover, along with Fahrenheit, Hellstrike, and others.

Fuji will have a supporting role in the new Stormwatch series written by Christopher Gage. The explanation to his return is unknown.

Retrieved from "https://imagecomics.fandom.com/wiki/Toshiro_Misawa?oldid=49848"
Community content is available under CC-BY-SA unless otherwise noted.