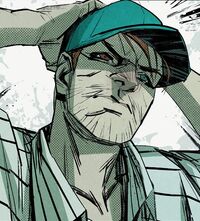 Travis Crowe was born with one blue and one red eye. A sign that has been passed down by various individuals throughout the years.

As a small child, Travis' mother, Tilly, was attacked by a man with a sledgehammer. Travis then grew up in various foster homes. He blamed Klay for being constantly moved and found himself consulting with his dog as a form of release as he was not close with many others.

Travis was habitually late for his job and was eventually placed on administrative leave by Robby Doyle. He attempted to reconcile with Klay on his past but soon found himself attacked by the man with the sledgehammer once more and his friend Klay was murdered.

He was soon instructed to receive anger management counselling which lead him to contact Eric Burton, a therapy leader who concealed his one red eye with a colored contact.[1]

Later, Melissa met with Travis again and brought up this picture she and Klay had shown him. She took Travis to see the man who took the picture of his parents to see if it would turn up any leads. They suddenly found themselves in a scuffle as the Travis recognizes him as the guy who had harmed Klay. After a brief scuffle, the police soon arrived and arrested them. Melissa waited outside the police station and brought Travis home home from police station. They discussed that it was strange that no charges were pressed as they drove off.[2]

Later, the two finished moving in to their apartment together. Melissa said she wanted to meet with him for dinner but Travis was aloof about where he was going. He secretly went to another of his anger management therapy courses. He tried to get out of it but eventually got in a fight with another member of the group. A fellow member, Jenny, tried to console him and bond with him. He took off to meet with Melissa.

When he was late to the bar, Melissa was fed up and was about to storm out of the bar when he finally showed up. After he sweet talked her, she agreed to stay. However, he was soon distracted by two bullied and ended up in a fight again. She decided to leave him at the bar as the two men were pummeling him. Travis was arrested and placed in the back of the police vehicle when his therapy friend, Jenny, showed up and released him claiming he was family and that he needed her help.[3] Travis left the vehicle in anger. On his way home, several men attempted to rob him. When his eyes glowed red and he told them to stop, they mysteriously left him alone.

Upon arriving home, Detective Young waited for him at the door. He asked about how Aaron, the man he fought earlier, was suddenly found dead. Travis ignored the detective and headed inside.

He later took his dog out for a walk to find Jenny waiting for him. She apologized for stalking him. At the same time, Melissa returned home and found him with Jennifer. She became suspicious of his activities and the two got into another argument.[4]

Over the next few days, she continued to give Travis the cold-shoulder and passive aggressively made comments about him hanging out with other women. Travis protested Jennifer was just his sister. She began to pack her bags to leave Travis for a few days, but her hot-headed brother insisted she stay away permanently. In the heat of the moment her brother Seth let slip that Melissa was pregnant. Rather than face his issues with his girlfriend being pregnant with his child, Travis told Melissa to just leave.[5]

Retrieved from "https://imagecomics.fandom.com/wiki/Travis_Crowe_(Sons_of_the_Devil)?oldid=45129"
Community content is available under CC-BY-SA unless otherwise noted.