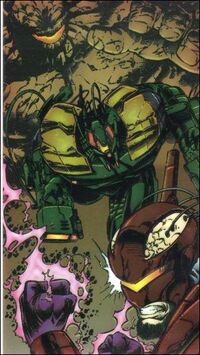 The Troika is a supervillain team working for other villains, mostly opossed to the WildC.A.T.s. As the name says, the team is composed by three members:

The Troika first appeared working for the Gnome, helping him to retrieve the orb from Helspont. After the Gnome was defeated by Lord Emp, the Troika fled.

They were later seen working for Soma and Tapestry.

When Savant assembled a new version of the WildC.A.T.s, they took a more proactive approach, and their first target was H.A.R.M., who was killed by Condition Red shooting his organic brain. Attica and Slag were captured during H.A.R.M.'s funeral. They also captured Deathtrap, but he escaped and, enraged by the WildC.A.T.s attacking during a funeral, assembled other villains to declare war on the 'C.A.T.s.

Attica and Slag were kept in a virtual reality environment. When the WildC.A.T.s found that Tao had caused the war through manipulation, he freed Attica and Slag as a distraction. They weren't sure if it was still the virtual reality, but they decided to kill the WildC.A.T.s anyway. John Colt suddenly appeared and his change of codename further confused them, so they decided to escape to fight another day.

Retrieved from "https://imagecomics.fandom.com/wiki/Troika?oldid=51860"
Community content is available under CC-BY-SA unless otherwise noted.