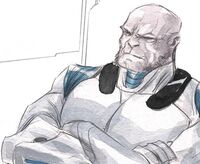 Tullis is a UGC member who supports Captain Telsa.[1]

Upon learning that the Tim series of robots, a robot with similar codex as the Harvesters, Tullis and Telsa brought Dr. Quon to the Dirishu-6 Moon. Upon arriving, they discovered another ship had already landed. They quickly armed themselves. They found and relocated the injured Tim-21 robot to their ship to perform emergency medical procedures.[2] Tullis piloted the ship to return to Niyrata to study the droid but their ship was suddenly captured by the Scappers and had come from Gnish to also retrieve the Tim bot.[3]

Upon arriving in Gnish, Tullis was placed in the Melting Pits where he fought against other robots in a Colosseum-like death match alongside Driller.[4]

Andy Tavers and Blugger Vance soon arrived on Gnish. They were tracking a bug planted on Tim-21's ship but found that Tim-21 had already left the planet when they arrived. They stumbled into Tullis and Bandit who were in the holding pits of the fighting arena. When Tullis realized that Andy was THE Andy that used to own Tim-21, they devised a plan to escape and find Tim. Andy realized that Bandit had a chip that was connected to Tim so they could always find each other. He proposed finding his ex-wife who could rig the electronics to find Tim.[5]

Retrieved from "https://imagecomics.fandom.com/wiki/Tullis_(Descender)?oldid=75713"
Community content is available under CC-BY-SA unless otherwise noted.