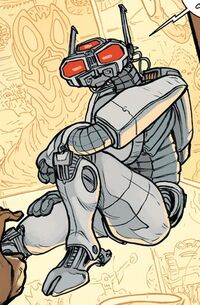 UNa is a series nine espionage and infiltration droid.

He helped Laika escape from the Sionnu aboard the Nebula Left.[1] They traveled to the Faraway Station where they met with Laika's old friend, Yuri Gagarin. UNa then brokered a deal with Primor on Faraway Station to pilot the Nebula Left and return him to his homeworld. In order to reach the planet, they needed a Gateway Access Key which Ryleth, a fellow crew member, offered them the location of one. Upon attempting to steal it, UNa was killed a defense trap and Ryleth betrayed them and had a sick sense of justice to never allow stealing.[2]

As they traveled to the homeworld, they were pursued by Ryleth. Ryleth secretly attached himself to the bottom of the Nebula Left and called in to the Sionnu about their arrival. Yuri spent his time attempting to rebuild UNa. However, at the same time he attempted to reprogram UNa to stop lying. Rys began speaking in English for the first time to Yuri and asked him why he'd want to change who UNa really is at his core.[3]

They soon passed through the gate. They were shocked to find Sionox waiting for them with a battalion of Sionnu warships.[3] Their ship was boarded by Ryleth the Hammer who had fixed himself to the bottom. When Rys tried to stop him, he was killed by Ryleth's hammer. UNa became furious and was covered in Rys' blood. He self-destructed which killed himself in an electrical shock and knocked out Ryleth.[4]

Retrieved from "https://imagecomics.fandom.com/wiki/UNa_(The_Manhattan_Projects)?oldid=55427"
Community content is available under CC-BY-SA unless otherwise noted.