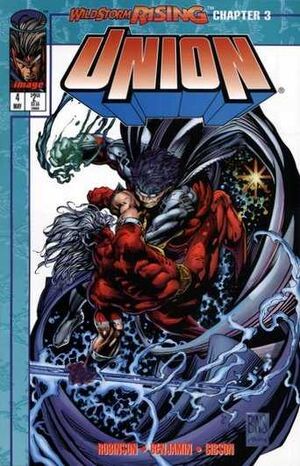 Appearing in "WildStorm Rising, Chapter 3 of 10"

Earlier, the MERCs, seeking the location of the Daemonite mothership had attacked Savant, only to be repelled by Mr. Majestic.

When Union suddenly appears, he mistakes Majestic for a villain. He attacks, and a ferocious battle ensues. Finally, Savant convinces the combatants that they are allies.

In Defile's headquarters, the Daemonite lord pores over a Team 7 file. One of them holds the missing half of a key, and Defile vows to possess it.

Retrieved from "https://imagecomics.fandom.com/wiki/Union_Vol_2_4?oldid=63751"
Community content is available under CC-BY-SA unless otherwise noted.