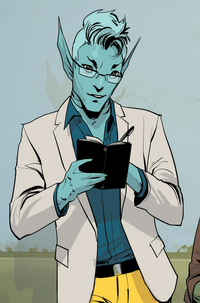 It's our job to go through the dirty sheets.

Upsher is a journalist for the Hebdomadal. He, and his partner Doff, began chasing Marko and Alana for a story when they learned that Marko and Alana, members of opposing sides in a war, may have married an enemy combatant -- a big news story.[1]

First, the duo paid a visit to Even, one of Alana's long-time friends who claimed Alana would never not support the war effort.[2] The duo followed up and visited Countess Robot X, Alana's supervising officer in the army, on Mota. The Robot informed them that Alana showed hesitation to bomb enemy civilians and was dismissed for her cowardly actions. A sudden sniper shot winged Upsher but he quickly recovered and escaped.[3]

The duo next visited Special Agent Gale after one of his workouts. The showed him a picture of the two with a baby and were ushered inside. Gale lied and told them it was a deep cover situation and they should keep quiet about the story. After the duo left, Gale called the Freelancer Agent for a hit on them.[4]

Later while laying in bed, Upsher whispered to Doff that he thinks Marko and Alana went to Quietus. However, they were suddenly attacked by two poison darts in their bed. They turned on the lights and found The Brand and Sweet Boy in their room. They had been called in to complete the hit for Gale. The Brand told them they had been poisoned, but it would only kill them if they spoke about the Alana and Marko story. She told them she is not killing them because she appreciates the articles they wrote for the Freelancers during the strike.[5]

For a while, Doff and Upsher kept their word. The Chief offered them a chance to follow up on a story with Prince Robot IV going missing while having a baby and they turned it down, knowing they'd be killed by the Brand's serum if they spoke of the events.[6]

After time passes, the Doff dropped the story while Upsher still liked to keep tabs. He even saw a reference on the Open Circuit which reminded him of Alana. He became suspicious that the television actor may in fact be her.[7]

The duo continued their lives on Jetsam. One day when Doff developed a picture in his dark room, Upsher broke into the room and ruined the picture as he announced he had important news. Upsher showed him a newspaper, announcing that The Brand has been murdered. He believed the drug that would kill them if they talked about the Marko would no longer be effective now that The Brand was dead. Doff told him wasn't not worth the risk, but Upsher blurted out to their newspaper chief about Hazel being a wartime love-child. The Chief told them to get serious and walked away. Doff began to believe him but was still hesitant to chase the story. He began to draw parallels to their own homosexual relationship with each other and wanting to be left alone.[8]

They followed up on a 'missed connection' ad in the newspaper, where a woman was looking to meet a man described to be like Marko. They arrived on Gardenia where Ginny, the author of the missed connection, ushered them out back to speak to them in private. She slipped about them being chased by a royal blueblood and the duo realized how deep the story was going to be.[8]

Upsher and Doff take a ship and traveled around Outcome in an attempt to find heat signatures of Marko and Alana. They found The Stalk's Skullship abandoned on a planet and move in to investigate. However, they were suddenly attacked by The Will. The Will used his Lance to incapacitate Doff while he interrogated them. He demanded to know where Prince Robot IV was located but the duo swore they didn't know. He released Doff from his lance and told them they work for him now.[8]

When Upsher had enough and told him to kill them already, the Will pulled out his gun to execute them. However, Doff interceded and told The Will he'd get in touch with a contact that may be able to locate the Prince if he agreed to let them both live.[9]

Retrieved from "https://imagecomics.fandom.com/wiki/Upsher_(Saga)?oldid=60235"
Community content is available under CC-BY-SA unless otherwise noted.