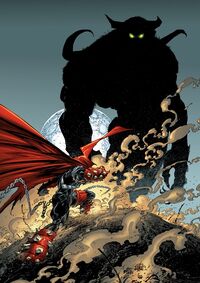 Urizen is a demon older than memory. Long ago he was imprisoned in the void by the combined forces of Heaven and Hell. For reasons unknown, the writer, William Blake, wrote about Urizen though no one was sure how he obtained the information. Experts such as Cogliostro recognized it was difficult what to tell what was truth and what was fantasy with his writings but recognized Urizen cannot be destroyed, only contained.[1]

The Group, 13 fanatics in England, first tried to release him by sacrificing each other one at a time under a full moon. They would then eat the sacrificed person and gain the power of their soul. This would then grant each member more power with each soul they consumed until one remained. Their belief was that this would release Urizen from his prison. However, they were stopped by Spawn who tainted the dead bodies of one of their victims before they noticed. They soon died of the poison and left the prophecy of releasing Urizen incomplete.[2]

Soon in Pennsylvania, two more people were murdered by Spawn interfering. However, once dead, their bodies were resurrected and Ab and Zab walked the earth once more. They set out to find 13 victims to kill and set afire. They completed this task under the full moon, and released Urizen from his prison.[3]

When Urizen was first challenged by Spawn, he quickly impaled him over a sign and left him to rot as he continued to feed on the souls of innocents.[4] Every town that Urizen entered caused the locals to fall under his power. The locals killed each other as they had their minds possessed by Urizen's power.[1]

Spawn was resurrected with new Greenworld powers. He used them to raise trees around Urizen and trap him. He eventually pulled Urizen underground and trap him once more in the earth below.[5]

The town of Malice was eventually rebuilt and many people in town were unable to recall being possessed by Urizen. Three brothers were playing on the Devil's Right Hand and a small shard of the rock went into one of the boys' foot. A portion of Urizen's power had been released and the three brothers found they had new powers.

They quickly lost control of the power and Spawn returned to exorcise Urizen from them. The boys were never the same again after the experience.[6]

Retrieved from "https://imagecomics.fandom.com/wiki/Urizen?oldid=67783"
Community content is available under CC-BY-SA unless otherwise noted.