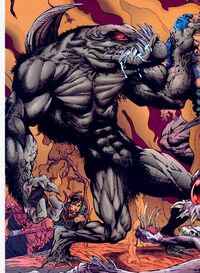 Vandalizer is the most heavily built of the five Phlebiac Brothers.

Vandalizer despises his older brother Violator. He believes that he is the strongest and could easily destroy Violator. However, every chance he tries he ends up failing. Violator always proves himself more superior, but it never stops Vandalizer from trying to kill his older brother. Vandalizer is also fifty-one years younger than Violator.

Retrieved from "https://imagecomics.fandom.com/wiki/Vandalizer?oldid=66390"
Community content is available under CC-BY-SA unless otherwise noted.