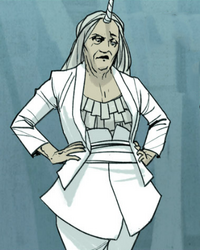 A Wreath leader who wants Marko and his wife Alana dead. She wants their child returned. Vez hired The Will and The Stalk to hunt them down, even though she has a strong dislike for Freelancers. She gave them each an unlimited credit card and instructed them it would be a race for the large reward.[1]

Retrieved from "https://imagecomics.fandom.com/wiki/Vez_(Saga)?oldid=60224"
Community content is available under CC-BY-SA unless otherwise noted.