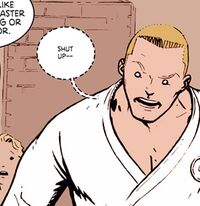 Shabnam quickly made his move and teamed up with several students who were not rats, including Victor. He agreed to become the intelligence if Victor would be the military and he offered Victor a large automatic weapon a gesture of their new partnership to kill Marcus.[5]