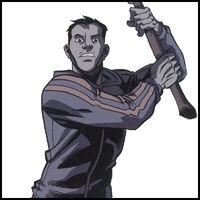 Young Victor was verbally and physically abused by his father so often that he became consumed with a gripping fear of everything. He was later taken to a man named Lionel to be his tutor.

Retrieved from "https://imagecomics.fandom.com/wiki/Victor_Casparian_Jr._(Fearless)?oldid=59188"
Community content is available under CC-BY-SA unless otherwise noted.