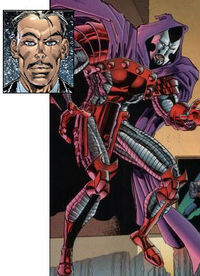 Overlord is a super-powered crime lord who operates out of Chicago.

Following the death of Antonio Seghetti, the OverLord armor was locked up in Stronghold Penitentiary. It was briefly worn by both Mace and CyberFace before getting thrown away by BrainiApe. The device was left lying around in Pipetown where the Vicious Circle battled against Dragon, the Chicago Police Department and various heroes. It was picked up during the melee by Victor Nixon who spotted it as a means for him to spy on the object of his affection, Rita Medermade.[citation needed]

Nixon began wearing the armor more and more and soon started noticing that he could not remember the events that had occurred whilst he wore it. This was due to Seghetti’s downloaded mind gaining an increasing amount of control over both the armor and Nixon himself. After OverLord started killing again, he refused to allow Nixon his freedom for fear of discovery and kept him trapped inside.[citation needed]

Retrieved from "https://imagecomics.fandom.com/wiki/Victor_Nixon?oldid=67107"
Community content is available under CC-BY-SA unless otherwise noted.