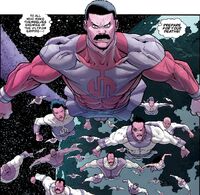 The Viltrumites are a race of warriors and planetary conquerors from the planet Viltrum. After their emperor, Argall, was killed by Thaedus[1], the Viltrumites engaged in a civil war by killing off the weak on their planet. The population was made into an unbeatable race, led by Thragg. The Viltrumites established the Viltrum Empire and turned their attention to conquering planets [2]. Thaedus founded the Coalition of Planets to combat their tyrannical ways [3]. The Viltrumite population would be cut down enormously by The Scourge Virus [4], ultimately leaving fewer than 50 of them. After the Viltrumite War with the Coaltion, there would only be 37 Viltrumites left in the universe. [5] Their ranks were replenished by Thragg's Children.

Superhuman strength and ability to go Massively Faster than Light. Their enhanced durability makes them almost indestructible and they are only susceptible to harm by others of their kind or other powerful creatures. Their invulnerability has shown to be as powerful as not at all being affected by the most powerful nukes of the modern day.

Average strength is about 100,000 tons but upper limits of some are unknown.