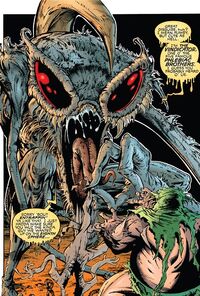 Vindicator is one of the five Phlebiac Brothers.

He first spied on Billy Kincaid upon his Billy's arrival in Hell. Acting as a guide, he waited to see if Billy was still a killer before admitting him into Malebolgia's army on the Eighth Sphere of Hell.[1]

When his brother, the Violator, was punished by Malebolgia and trapped in his Clown form, Vindicator was the only brother to side with saving Violator's life as he was being hunted by the Admonisher. When the Phlebiac Brothers arrived on earth, Vindicator summoned a Hemisphere of Nacreous Containment spell around them so humans could not enter their city and interfere with their plans.[2]

Retrieved from "https://imagecomics.fandom.com/wiki/Vindicator?oldid=29643"
Community content is available under CC-BY-SA unless otherwise noted.