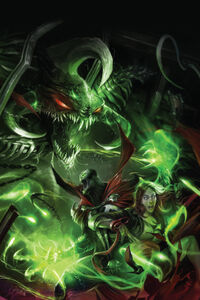 The Violator is one of the five Phlebiac Brother demons. He moonlights in a "Clown" form to hide amongst the living realm and has been sent back to the eighth sphere of Hell at various points for failing to complete his mission. He is powered by Necroplasm and can perform magic like incantations, possesses supernatural strength, agility, and cunning wit. He is naturally drawn to murder and maintains a casual attitude while doing so due to his eternal life-span.[1] He is the archenemy of Spawn and the most recurring villain of the spawn comics.

In the Sixteenth Century, Dr. John Dee summoned a demon, a Phleboton Spirit of the Upper Ayres. The demon had an insatiable appetite for murder and sex and was offered Dr. Dee’s wife to satisfy his needs. However, when Dr. Dee's wife gave birth to the spirit's offspring, the Violator, she died in the process. The Phleboton spirit continued on with mating and the death of the mother was the case with each of the five children the demon had with mortal women.

While growing up, the Violator was frequently picked on by his four younger brothers. His dad frequently took their side and punished Violator in the process. Eventually becoming fed up with the abuse, Violator retaliated and murdered his father. As a result for his ruthlessness, Malebolgia offered him a position as chief lieutenant in hell.[1]

Being the oldest of his five hell-born demons known as the Phlebiac Brothers, he viewed humanity as weak, and so asserted that demons should lead the armies of Hell, not humans. Accordingly, much of his terrestrial activities, sanctioned by Hell or not, were aimed at proving his superiority to his master.

The Violator was sent to Earth. His purpose was to groom and prepare young Hellspawn for their service in hell's army. The Violator was not a demon to be taken lightly; he had shown many times that he was more than a match for young Hellspawn. His latest charge being the current Spawn, Albert Simmons. His hands were tied by his role, though, as he cannot kill a Spawn without an order from his superiors. His role was to weaken them and cause them to waste their powers in wreaking havoc. Upon expanding all their Necroplasm, Hellspawn would be returned to Hell to serve in Malebolgia’s army.

However, the Violator began a killing spree and incited the Mafia to lay low instead of causing more crime. The Violator was fed up with playing second fiddle to Hellspawn and attacked Albert Simmons. He was defeated in a battle by Spawn and was punished by Malebolgia for performing the opposite of his role’s intentions. Malebolgia locked the Violator in his Clown form as punishment, and gave him mortal weaknesses.[2]

Due to the murders the Violator had caused, the Mafia was furious. They captured the Violator and forced him to admit his crimes against them. When they attempted to murder him, he broke free and escaped. Furious with his escape once more, Tony Twist hired the Admonisher to track down and murder the Violator.[3]

The Violator's older siblings, the Phlebiac Brothers, watched him struggle and agreed to head to Earth to save the Violator from dying by the hands of a human, and thus tarnishing the Phlebiac name. They decided his death by their hands would be much more satisfying.[1]

During the commotion between his brothers and the Admonisher, the Violator slipped out and tricked Spawn into restoring his magic powers and ability to transform.[4]

After laying low for several weeks, the Violator returned to New York City and met with Jason Wynn. He blackmailed Wynn to work with him. He had Wynn mess with Wanda Blake and Terry Fitzgerald to drive Spawn out from hiding.[5] Wynn was dragging his feet and the Violator stopped by and ordered Wynn to threaten the people close to Spawn to stir the pot.[6] The Violator wanted to be next to Malebolgia when Armageddon began. He decided to show Malebolgia that he could use his brains by manipulating Wynn into having Spawn use his limited powers.[7]

However, Spawn soon disappeared. While happy at first, Violator realized he wouldn't get promoted unless he proved himself to Malebolgia.[8] He grew weary of waiting for Wynn and took matters into his own hands.[9] The Violator kidnapped Cyan Fitzgerald and attempted to frame Wynn for the action.[10]

When Spawn learned of Cyan's kidnapping and discovered it was the Violator, he attacked the Violator in the alleys. However, the Violator laughed at Spawn. He informed him that he was slow-minded and thought it was funny that he still thought it was Chapel that had killed him. This put doubts in Spawn's head that he would soon chase out his real killer. Spawn had enough of the Violator's tongue and used his Necroplasm to banish the Violator from Earth.[11]

The Fight for the Throne of Hell

Later, when Hell was vacated by the death of Malebolgia,[12] the Violator attempted to step in as its new ruler as he was still banished to hell. However, Spawn soon returned to hell to challenge him for the throne.[13] The Violator was quickly defeated when Spawn unleashed and embraced the power of hell.[14]

Later, The Violator still wanted revenge on Spawn. He was convinced by Mammon to head to earth and pollute Jason Wynn's mind. One of the first orders of business Wynn performed while under the Violator's control was to have old files of Al Simmons dug up.[15] While researching Al by day, at night he moonlight with hookers. He specifically met with hookers that dressed and acted like Wanda Blake.[16] He then murdered them and wrote messages to Spawn on the wall with their blood.[17]

Later, Jason Wynn, still under control by Violator, painted Violator make-up on himself and cornered a woman who looked like Wanda in an abandoned building in New York City. The innocent woman pleaded to be let go but Wynn closed in on her with a drill and called her Wanda. Spawn burst onto the scene and quickly overpowered Wynn. Spawn pulled back his mask to reveal he was Al Simmons and wanted him to remember it was him who brought him down. Wynn had an internal mental battle with the Violator and the Violator broke free from Wynn. Wynn then threw himself from the building and Spawn was speechless, watching him mentally battle himself, unaware that he was possessed by the Violator.[18]

While the fall would have killed any normal man, the Violator took control of Wynn's body one more and snapped his joints and bones back into place having survived the multi-story drop. The Violator was now in complete control of his body.[18]

Now reborn, the Violator soon revealed his true form to several drug dealers and used his powers to convert them to his loyal followers as he moved once again to get back at Spawn.[19] He built up an army of thousands of clown followers and lured Spawn into a trap.[20] After defeating him in battle, the Violator had Spawn tied up with a thorn-crown on his head in the Dead Zone. Spawn layed battered and unable to recover due to the Dead Zone's neutralizing affects on his powers. One of the Clown's followers get too close and Spawn grabbed him and threatened to kill the follower if he was not released. The Violator laughed and cut the man's head off. He ordered his followers to grab the man and throw him on the dinner table for food. He had all of his followers throw food at Spawn and ridicule him to show how evil he had become.[21]

Spawn eventually freed himself by temporarily transforms into his mortal form of Al Simmons but quickly changed back. The transformation loosened his shackles as he pulls himself out of the Dead Zone so his powers could heal him. He immediately headed to where he heard the Clown's music. He pulled back a curtain and found the Violator waiting for him. He stood in the middle of a circus ring and welcomed Spawn to challenge him to a fight in front of his converted clown army. The Violator easily beat the weakened Spawn as his followers cheered. He unleashed his followers to cause havoc in the city.[22]

Spawn defeated the many civilians who were inhabited by Violator and the Violator retreated once more though he left Al Simmons severely wounded. All according to Mammon's plan for why Violator had been released.[23]

He returns in Spawn #167, now a thin clown. In Spawn #168 it's revealed that his spirit jumped into the body of an unfortunate man named Barney Saunders, who was trapped in the garbage chute and without the spirit of Violator would have been eaten alive by rats and roaches. In his new appearance, Violator has also become very dangerous in his Clown form displaying great speed and agility, using a knife to attack his enemies. He has also regained his ability to change into his demon form when he wishes.

Barney Saunders as it turns out was the lover of a married woman named Wilma Barbera. Trying to escape discovery by Wilma Barbera's husband, Barney Saunders had tried to escape through the garbage chute only to be trapped there a couple of days before the bright light event (Spawn's destruction and recreation of the world).

The Violator is revealed to be the cause of all the havoc of the apartment complex, freeing the residents of restraint and allowing them to fulfill their desires and violent urges. This allowed the Violator to create a portal to hell from which Violator's brothers could enter the earth. Violator was confronted by Spawn, but easily gained the upper hand in the battle. Clown/Violator had a weakness though which was the love the Barney Saunders had for his girlfriend, causing the downfall of his plan. Just mere moments from Violator's victory, Barney Saunder's spirit was able gain control when he saw the face of his lover, Wilma Barbera, but he still had the appearance and powers of the the Clown. Barney Saunders decided to go through the portal into hell, knowing that the only way to close the portal was to trap himself and Clown on the other side while he could still maintain control over his body. But Barney Saunders/Clown did not want to go to hell alone. After a discussion, Barney Saunders revealed that he was angry at his lover for not coming to save him when he was starving to death in the garbage chute and took her with him, thus stranding The Violator, Barney Saunders and Wilma Barbera in hell. Now comes the wait for Clown's return, his reaction to sharing one body with Barney Saunders and to see what has become of Wilma Barbera.

The Violator had been stuck in his clown form for quite some time. He spent his time a nudie bars and was eventually approached by Albert Simmons. Al needed a demon guide to help open the gateway to the Tunnel. The Violator agreed if he exchanged some power for him so that he could 'shape-shift' again. Unknown to Spawn, the Violator already had the ability and was craving more power.[24] They soon entered the Tunnel together, where the Violator guided them to the gateway that would bring Spawn to Satan.[25]

Clown, as he appeared in the HBO miniseries

John Leguizamo as Clown in the Spawn feature film

Retrieved from "https://imagecomics.fandom.com/wiki/Violator?oldid=68835"
Community content is available under CC-BY-SA unless otherwise noted.