Start a Wiki
The Clown 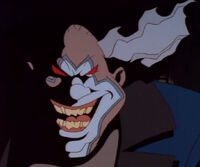 The Violator is a Demon in disguise as a clown. He hates Spawn as well as all humans as he believes he should be the rightful leader in Malebolgia's army. His job is to train new Hellspawns and help them in embracing evil, so that they may one day lead Malebolgia's army.

The Violator transformed into a deranged Reverend, to kill several officers and instigate Spawn into killing.[1] He used the distraction to kidnap Cyan and deliver her to baby-killer Billy Kincaid.[2]

When Spawn overheard police scanners reporting that Cyan had been kidnapped, he sprang into action to save her. The Violator watched in anticipation expecting Spawn to take out his anger and murder Billy. When he put Billy down and left him for the officers sparing his life, the Clown transformed into his true form as the Violator for the first time. He warned Spawn to get with the program as Hell has a plan for him.[3]

Retrieved from "https://imagecomics.fandom.com/wiki/Violator_(Todd_McFarlane%27s_Spawn)?oldid=68253"
Community content is available under CC-BY-SA unless otherwise noted.