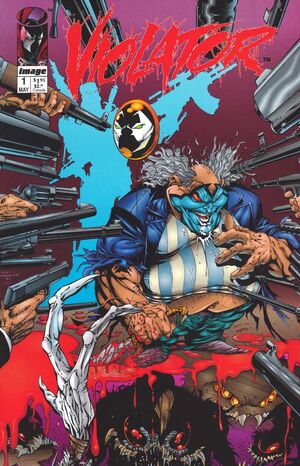 Appearing in "The World-Part One"

Plot Synopsis for "The World-Part One"

The Phlebiac Brothers attempt to spy on their brother, Violator, through a blood pool. When the image zooms in on him, they are confused to see him in his clown at first being escorted by several Mafia members.

In New York City, Tony Twist has his henchmen throw the Clown into the ocean with cement shoes. He remarks he appreciates his honesty for admitting that he killed his men earlier.[1] As the henchmen prepare to throw the Clown into the ocean, the Clown bites down on a henchman calling himself Tommy's tie. The henchman throw the Clown in as he drags the henchman with him. As they are pulled down by the cement, the Clown grabs the Tommy's gun out of his pocket in a struggle. He blows a hole in his brain and then points the gun at the cement shoes. He blasts several rounds into it causing it to split and releasing him.

Up top, the men search the coastline in the dark to see if Tommy had freed himself in the struggle. They hear a small voice claiming to be Tommy. The henchmen ask if he's ok and he says he has a headache. The clown reveals he's shoved his hand and gun through the back of Tommy's skull and starts wasting the henchmen.

In Hell, the Phlebiac Brothers argue as to whether they should help Violator since he's disgraced their name. They kill an innocent victim in Hell to spill more blood into their pool to improve their vision as to what's happening down on Earth.

Twist has Alberto usher in Admonisher, a new bodyguard he's hiring to hunt down Violator.

At a mall, the Clown walks through with Tommy's head still stuck on his arm due to rigor mortis. The Admonisher attacks him and the Clown defends himself. The Clown becomes slightly worried as he's now mortal and could die. Suddenly the mall has growths of vines, warts, and demonic manifestations. The Phlebiac Brothers appear to save their brother's life in order to preserve their name.

Retrieved from "https://imagecomics.fandom.com/wiki/Violator_Vol_1_1?oldid=42810"
Community content is available under CC-BY-SA unless otherwise noted.