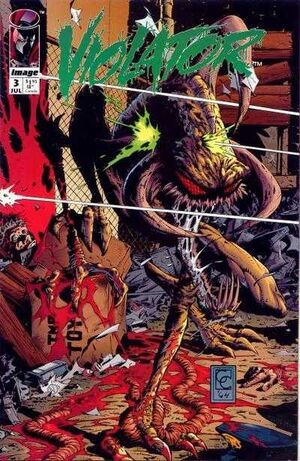 Appearing in "The World-Part Three"

Plot Synopsis for "The World-Part Three"

Spawn reluctantly agrees to restore the Clown to his true form as the Violator in exchange for the Violator agreeing to restore his magic powers to full. Upon being restored, Spawn is weak. Instead of fulfilling his promise, the Violator kicks him off the rooftop into the alleyways below.

As the Phlebiac Brothers are distracted with fighting the Admonisher, Vandalizer turns his attention to Violator who has returned in his Clown form. When Vandalizer is distracted, Violator transforms back to his demon form and rips Vandalizer limb from limb.

Tony Twist and Albert appear to check on Admonisher's progress. When Violator sees Tony, he gives chase through the mall. When Tony is cornered in a store, before Violator enters he knocks out Albert and throws him on the floor and puts Albert's sunglasses on. Since they are of similar stature, Violator is fooled into thinking Albert is really Tony Twist. Tony takes this opportunity to escape with his life.

As the Admonisher chases the Phlebiac Brothers, they decide to retreat through a Hell Gate back home. They grab Vandalizer and escape.

Retrieved from "https://imagecomics.fandom.com/wiki/Violator_Vol_1_3?oldid=47205"
Community content is available under CC-BY-SA unless otherwise noted.