"Where Angels Fear to Tread" 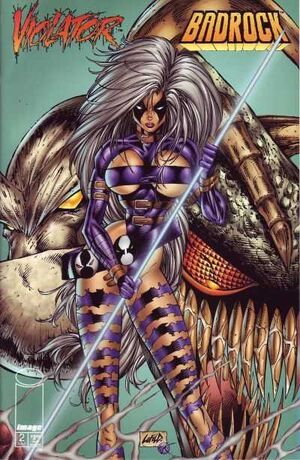 Appearing in "Where Angels Fear to Tread"

Plot Synopsis for "Where Angels Fear to Tread"

Celestine rips through the lab looking for the Violator. When she finds Dr. Sally McAllister, she knocks her knocked unconscious.

Meanwhile, the Violator warns Badrock of all the things Celestine will do. She will destroy the facility and all in it to keep people from opening gateways to Hell. In a moment of weakness, Badrock agrees to release the Violator if he promises to fight Celestine. However, as he is released he transforms into his Clown form which confuses Badrock.

Suddenly, Celestine breaks into the room and attacks Badrock thinking he is the demon. While she has her back turned, the Violator rips her heart out knocking her unconscious. Violator then takes off amongst the chaos.

Celestine opens her eyes and pulls herself towards Dr McAllister's machine and activates it with her dying breath.

Dr McAllister's re-awakens and finds Badrock in the facility. At first, she is distraught that her machine was activated but didn't work. Badrock opens the for and they see the whole facility was transported to Hell and the realization that the machine did more than just open a single doorway.

Retrieved from "https://imagecomics.fandom.com/wiki/Violator_vs._Badrock_Vol_1_2?oldid=62364"
Community content is available under CC-BY-SA unless otherwise noted.