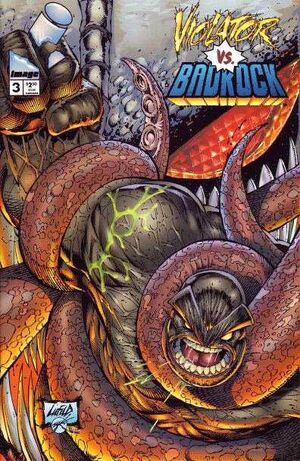 Dr. Sally McAllister reports to her hand-held voice recorder on being transported to Hell. She walks outside and finds Badrock beating back several demons from the facility. Badrock yells at everyone to head back inside for protection.

They check on the power source keeping them in Hell, Celestine. They find she is turning into an old woman with the power being sucked out of her. They hear a scream from somewhere in the facility and head to investigate.

They find the five Phlebiac Brothers together again as they are about to attack Violator. The four brothers are looking for revenge.[1] As they pick on Violator, Badrock attempts tries to reason with them but they all turn on him and attack. During the distraction the Violator takes off.

Badrock then distracts them, confusing them to attack each other and retreats back to the facility before the power source ends and they return to Earth. When he looks for Dr. McAllister, the other scientists tell him she took off to collect data samples. Badrock checks on Celestine and sees she is almost completely out of energy.

Retrieved from "https://imagecomics.fandom.com/wiki/Violator_vs._Badrock_Vol_1_3?oldid=62371"
Community content is available under CC-BY-SA unless otherwise noted.