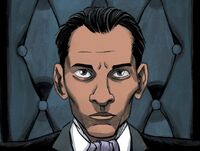 I am Headland. I am offended by your ham, sir.

Vivek Headland is a Logician and Ethicist with an interest in security.[1] He joined the CCCU when he was invited by Maria Kilbride to research potential futures and time.[2] He continued to be the think of the group and bordered on precognition with his ability to think of all the possible outcomes.[3]

Vivek was soon approached by John Van Der Zee as the spirit of his wife has stopped visiting him at night. As Vivek listens, he tastes the sandwich brought to him by his butler, Red, and excused himself suddenly. He realized the ham was human meat that belonged to John Van Der See's son. He called up two detectives and had the deli man arrested for the murder.[4] He later visited the man as he had a Confident Informant agreement with the police. He told the man he knew he was working for Rubedo and that he would be tortured when he was discovered to have been caught. The man agreed to speak to the police and that he was manipulating John.[5]

Headland later went to John's office. He used advanced technology to discover he had been having sex with the ghost of his wife in his office nightly. When he saw John's computer had the injection symbol on the screen, he immediately threw it in a Faraway bag and suspected the Injection was manipulating him. He called his old CCCC partners, Simeon Winters and Brigid Roth, to help with Rubedo and the Injection investigation.[5]

Retrieved from "https://imagecomics.fandom.com/wiki/Vivek_Headland_(Injection)?oldid=55615"
Community content is available under CC-BY-SA unless otherwise noted.