Start a Wiki
Spawn the Impaler 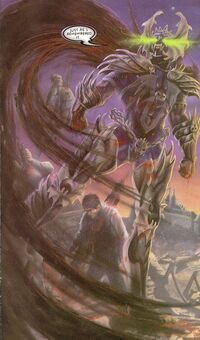 In 15th Century Romania, Vlad Tepes was prince and heir to the throne. Nearby Serbia soon invaded their lands led by Kazakla Bey. After successfully invading his lands and murdering his people, Kazakla Bey was victorious for this lifetime.[1]

Trapped in a box over the centuries, he eventually would be released and sought revenge on Kazakla who can be reincarnated. He found himself drawn to the city life and protected a young Abbie Carfax from a street thug attack.[2]

He took on the appearance of Drake, as he antiquated himself with Abbie. Once strong enough, he revealed his true form and called Abbie out to be a reincarnated version of Kazakla Bey. He murdered and achieved his revenge by throwing Abbie off the roof of his church.[3]

Retrieved from "https://imagecomics.fandom.com/wiki/Vlad_Tepes?oldid=67244"
Community content is available under CC-BY-SA unless otherwise noted.