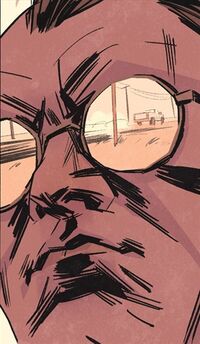 Detective Pope is a police officer who later became a private investigator in Los Angeles.

Pope received a call from his daughter, Vanessa that she was scarred. He asked for more personal time off from his sergeant but was denied.[1]

He soon secretly met with Vanessa at a diner. She informed him she lived in a cult house led by David. She was scarred and wanted out. She also said she wouldn't leave until he could promise Tilly's safety as well. He promised he'd look into it as he walked he back to her driver's vehicles. Pope took the driver's, Henry, bottle to check for DNA and fingerprints as they drove back to the cult.[2]

He later reviews all the evidence he had on Henry. He called in to the police squad to detain and arrest Henry on sight.[3]

Pope started a private investigation firm with Klay Landon. When Klay uncovered evidence on David Daly's whereabouts, he mysteriously ended up murdered. Travis Crowe showed up at their investigation firm's office and met Pope. Pope agreed to help him try and find Daly.[3]

Retrieved from "https://imagecomics.fandom.com/wiki/Wade_Pope_(Sons_of_the_Devil)?oldid=44956"
Community content is available under CC-BY-SA unless otherwise noted.