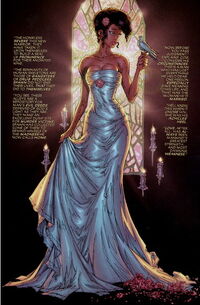 Wanda Blake is Spawn's, Albert Simmons, widow. After Spawn died, she married his best friend, Terry Fitzgerald. Wanda has kept her maiden name both times she has gotten married, much to her grandmother's dismay.[1]

Wanda and Albert Simmons were happily married for many years. They had a dog and tried to have children for years. The doctors said there was nothing more they could do and they accepted their life.

After Al returned to earth, five years after his death in 1992, he found Wanda had remarried his best friend Terry Fitzgerald. They found comfort in each other with Al's disappearance and had a daughter, Cyan. As Al visited their house in disguise and left, Wanda continued to think about the strange man.[1]

After Wanda's husband Terry came under investigation by the Central Intelligence Agency and Mafia at the same time, Wanda took her daughter and hid at her grandmother's house. Once the heat blew over, Wanda and Terry couldn't stop thinking how Spawn helped Terry and how everyone miraculously stopped investigating Terry at the same time Spawn showed up.

Wanda decided having two husbands put in danger by working for the CIA has put her through enough grief. She decides to investigate the Spawn scenario herself and learn more about Terry's life. She found Spawn by paying off bums in Bowery Alleyways. She was terrified upon finding Spawn torturing The Curse. She left him with a picture of her family and ran from Spawn terrified.[2]

Over the next few weeks, Wanda and Terry continued to work extra hours discussing Spawn's true identity. He had stopped by their house and pretended to be Al to their confusion.[3] Wanda was also kept busy as she was working on creating a children's wing at the local Hospital. When she received an anonymous grant, she became even busier working on preparing for construction. She developed a cough and passed it off as not important and due to her stress.[4]

Terry in the Hospital

Soon Terry also contracted the cough. His became worse and he eventually began passing out. When one time he blacks out behind the wheel of his car, he ends up in the hospital causing Wanda to drop all of her efforts and come to his aid. The couple soon finds out that Terry is suffering from cancer and will die soon. When Spawn discovers Terry's plight, he heals Terry not for him or for Terry, but for Wanda's love of him. Subsequently, using his magic brought Spawn to hell and out of Wanda's life temporarily.[5]

Wanda soon discovered Terry's spy equipment. She realized he was planning to take Wynn down and became upset that he wouldn't have told her as his wife.[6] Her time to become upset soon turned to fear as Cyan was stolen from their home.[7] However, Spawn returned her after discovering the Violator had taken her to incite Spawn to attack Wynn.[8]

As the days went on, Cyan would freaks out when every she lost her pacifier.[9] To the point where Wanda Blake was driving Cyan Fitzgerald down a busy highway and Cyan cried blood murder when she accidentally lost her pacifier with the shoelace out the window. When Wanda was forced to pull over to check on her, Cyan leaped out of the car into busy traffic to retrieve her pacifier. Wanda became concerned how this was the second time her daughter had acted like she was possessed when losing her pacifier.[10]

When Terry continued to come home late, Wanda eventually confronted him about staying out his activities with Wynn.[11] However, Cyan had a sudden seizure when Spawn disappeared from the earth which tabled their conversation.[12]

The straw to break the camel's back was when Wanda rushed in to hear Cyan crying yet again late at night. She was terrified as Mammon had been haunting her. However, Wanda found a branch broke through the window and didn't believe her. She wondered what's going on with her child. Her mind was once again pulled away from Cyan when she got a call from her doctor to learn she had become pregnant.[13]

Wanda took Cyan to a child's psychologist to have her analyzed. The psychologist agreed to see her several more times when she learned about the 'Sad Man' that she had been drawing.

Wanda broke the news to Terry and the two began an argument about whether she was faithful.[14] Over the next few nights, Wanda experienced dreams of something going wrong with her pregnancy.[15] These were put to rest when she was able to reconcile her issues with Terry upon discovering that they were further along than they had thought.[16] Comfort turned to fear when a sudden bleeding forced her and Terry to rush to hospital.[17] Wanda gave birth to two twins and was touched by an angel.[18]

Something Wrong with the Twins

Later, the Violator told Spawn the seeds had already been planted in Wanda and she would belong to hell soon.[19] Wanda and Terry were soon called to a crime seen where they discovered Al Simmons' grave had been excavated.[20] Terry quit his job to save his family. He recalled how Al began losing Wanda to his job and didn't want to make the same mistake. So he packed them up and they decide to move to California.[21]

While in Limbo, Al Simmons was approached by God. He informed Al that Wanda has suffered an accident and killed in a freak mob riot. Upon having the option to go to Heaven or Hell, Wanda went to Hell to be with their unborn child. Before passing, God anointed her which would temporarily protect her from the tortures and evils of hell. Al was sent back to save Wanda from her plight.[22]

Upon returning to Earth, Spawn discovers Wanda was killed by Belial as a way of getting back at God for punishing him.[23] When Terry attended her funeral, he was approached by Al Simmons. In exchange for telling him where she was headed so that he could hunt down her killers, he placed a protection spell on Terry and his family.[24] Spawn interrogated the TV station that she was headed to and received information from an undercover demon working there. Wanda was being held in the Tunnel and would soon be murdered and tortured if he did not hurry.[25] However, Spawn arrived too late, her soul was taken and held captive by Satan. When Spawn arrived he was once again propositioned a chance to trade his suit for Wanda's life. Spawn realized if he made the trade, he would be vulnerable and killed immediately. He turned down Satan's offer and Satan accepted his response as a declaration of war and he continued to hold on to Wanda's soul.[26] Spawn used an energy blast to distract Satan and escaped with Wanda during the confusion.[27] However, at the same time, Hellion had noticed Wanda was looking for something when he first abducted her. He split off and discovered Wanda's unborn child, buried underneath some rubble in Hell. He returned and found Satan and Spawn, still locked in battle. He threatened Al one final time, and told her he'd kill both the unborn child and Wanda if he didn't relinquish the suit to Satan.[28] 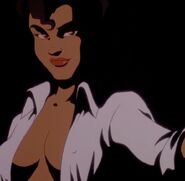 Retrieved from "https://imagecomics.fandom.com/wiki/Wanda_Blake?oldid=67903"
Community content is available under CC-BY-SA unless otherwise noted.