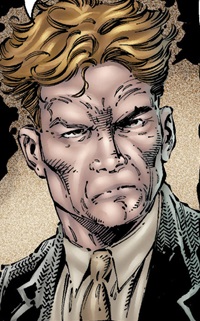 Wayne Tannanger is the rich son of Donovan Tannager, and heir to business empire. He was engaged to Gretchen Culver when her life ended early by a raping gone wrong by corrupt Sergeant Doug Halliday.[1]

Wayne hired Sam Burke and Twitch Williams on referral that they were the best. He offered them anything they wanted as long as they found closure for him on Gretchen.[2]

After searching for days and finally cornering officer Kenny Osbourne to confess in his aid of raping and murdering his wife along with Doug, they group fell victim to a drive-by shooting orchestrated by Doug. In the process, Wayne died of gunshot wounds and in his dying breath gave his engagement ring to Twitch to pass on to Gretchen.[3]

Retrieved from "https://imagecomics.fandom.com/wiki/Wayne_Tannanger?oldid=31359"
Community content is available under CC-BY-SA unless otherwise noted.