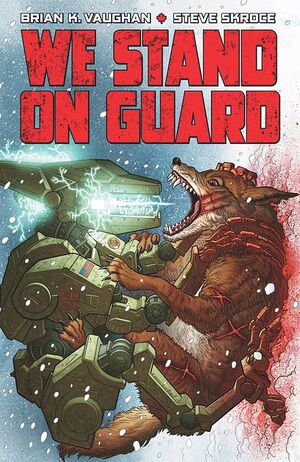 In Churchill, Manitoba during 2121, Tommy and Amber were surrounded, hiding in a cabin. Amber told Tommy they should've left on the freighter but Tommy told them it's better they didn't abandon their homeland. Amber told them it was just land, though Tommy told Amber it was Canadian soil. Amber told Tommy that no soil is worth dying for and Tommy said only the Americans are dumb enough to die for their country where Canadians live for it. Tommy unraveled a tunnel hidden beneath a trap door, which was covered by a rug. Tommy told Amber to hide while he surrendered himself to the Americans. Amber argued briefly, telling Tommy she can't be on the run without him but Tommy told her she was always better with frontier. Tommy then shut the trap door and hid it as he surrendered himself.

Qabanni and Highway argued on who should pilot the All-Terrain Vehicle. Highway argued he's a better driver and that there's historical difference, where Qabanni argued that's why she should pilot the vehicle. As the two argued, Dunn alerted them of an incoming troop transport. Amber told everyone to get in the truck as they could be in the hideout any minute. Shortly after, hundreds of Dog of War's and aircraft's busted through.

At the Ethan Air Force Base in South Burlington, Vermont, Ma'am conversed with the Secretary. The secretary alerted Ma'am that a desalination plant had blew up. The Secretary pointed out it was from the same cell of terrorists that Ma'am is after. Ma'am was then told of the riots occurring across the states. The Secretary then said the American citizens need to learn the war isn't against each other, or else the Canadians would bring the war to them. Ma'am told the Secretary to tell the President that she already sent a team to go after the Two-Four, without taking any prisoners. The Secretary asked what happened to McFadden and was told she was waiting a trial at a detainment center.

Back at the hideout, LePage fired at the Dogs, while Highway prepared to pilot the tank away. Amber asked where Qabanni was, where Highway told Amber he thought she was with her. Qabanni then apologized to Highway, as she piloted the All-Terrain Vehicle, telling the latter she just couldn't resist. Qabanni then fired at mountain, causing it to begin collapsing. Qabanni told them they could still get out via the south exit as she covered them. Highway told Qabanni they weren't leaving without her but Qabanni told them to just leave, before apologizing one last time for snaking his seat. Highway then got the team to safety. As they reached outside, they were ordered to exit their vehicle or they'd kill Dunn and Hungry. The Two-Four were told if they all exited the vehicle, no one would be harmed, though Dunn told them not to trust them. Amber asked if the cannons could take the Americans out, without hurting Dunn and Hungry. Highway said it wasn't possible and that it was over. The Americans said they were done negotiating and asked what their decision is. Amber then yelled out "Open fire!".

There goes the hideout.

Retrieved from "https://imagecomics.fandom.com/wiki/We_Stand_on_Guard_Vol_1_4?oldid=48392"
Community content is available under CC-BY-SA unless otherwise noted.