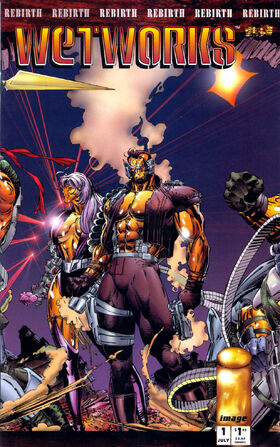 A special-ops team for International Operations is ordered to enter Transylvania and destroy a facility that is housing a very dangerous weapon that is capable of killing half of Europe. However, unknown to the team, this is a suicide run and the weapon isn't exatly what it is meant to be. The team finds something fishy along the mission and find a golden symbiote in the facility. They also find themselves finding some Transylvanians, but they are revealed to be vampires of the Night Tribe. The Wetworks, as the team is now referred to, use the golden symbiote to battle and defeat the Night Tribe vampires and have a new purpose.

Retrieved from "https://imagecomics.fandom.com/wiki/Wetworks_Vol_1_1?oldid=68941"
Community content is available under CC-BY-SA unless otherwise noted.