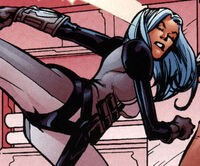 Widowmaker is a comic book super-villain, appearing the Image Comics series Noble Causes. Created by writer Jay Faerber and artist Fran Bueno, Widowmaker first appeared in Noble Causes #18 (March 2006[1]), in which she was hired by Hunter Blackthorne to assassinate Captain Dynamo, which she did with poison. She then took a job to attack Race and Liz Noble, only to be double-crossed by the Blackthornes. Currently, she is in hiding in a safehouse provided by Slate Blackthorne. [2][3]

Retrieved from "https://imagecomics.fandom.com/wiki/Widowmaker?oldid=67739"
Community content is available under CC-BY-SA unless otherwise noted.