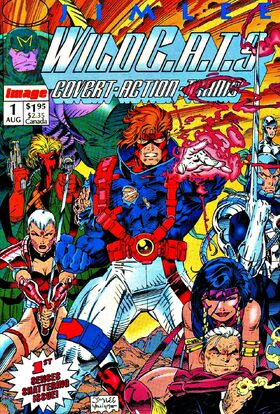 July 29th 1980:
Scientists from the US research station Zebra discover the remains of a Russian satellite that had crash-landed in the Antarctic. From the wreckage, Adrianna Teshkova, now known as Void appears. She speaks wildly about something called "the orb" and then disappears into the time-stream.

August 9th 1992:
At the International Operations (I/O) Crisis Control Center in McLean Virginia, director John Lynch monitors an explosion taking place in Georgetown. His assistant Frank Colby suggests to him that the explosion may have been caused by two rogue covert action teams. Void appears in the middle of the room and just as quickly teleports away again (This event actually takes place between issue #'s 1-2).

August 8th 1990:
A group of New York street thugs decide to beat up on a homeless man named Jacob Marlowe. Marlowe reflexively emits a blast of energy - a power that he had forgotten he had. Void teleports to the scene (from the timestream) and informs Marlowe that he is in fact an alien named Lord Emp from the planet Kherub. She tells him that he is meant for a greater destiny and decides to help him on the road to recovery.

August 8th 1992 (The Present):
Two years later and Jacob Marlowe is the CEO of Halo Incorporated, a multi-billion dollar company. Not only that, but he is the leader of a team of alien-human hybrid agents known as the WildC.A.T.s. The WildC.A.T.s are: Marlowe, Void, Spartan, Maul and Warblade. Void informs Marlowe that they must stop the Daemonite Cabal from initiating Project: Reunification. To this end, they must find a Gifted One with the power of sight before the Cabal does.

Later that same day, we find Helspont leader of the Cabal and his agents Pike, Providence, Hestia, and Devin. Helspont discovers that a Cabal lacky named Alberto Cassini has betrayed them by selling information on the location of the Gifted One to an information broker known as the Gnome. Helspont has Pike kill Cassini by smashing his face into a bowl of pasta.

The following day, Marlowe and Void go to visit the Gnome in Iran. The Gnome gives Marlowe the location of the Gifted One in exchange for an unconditional and undisclosed promise that Marlowe swears to honor. After receiving the information, the WildC.A.T.s fly off to Georgetown, Virginia.

Meanwhile, the adventurer known as Grifter and his mentor, the Coda warrior Zealot likewise track down the location of the Gifted One. Grifter goes inside a strip club called the Hot Spot wherein he finds Priscilla Kitaen aka Voodoo dancing on stage. He is about to approach her when he recognizes the Coda assassin Devin as well as two Daemonite agents entering the room. Voodoo has the uncanny ability to see Daemonites in their true form (The Daemonites are shape-shifters). Grifter springs into action and begins fighting the Daemonite agents. The WildC.A.T.s emerge on the scene and lend Grifter some assistance. Zealot likewise arrives and finishes off the last of the Daemonites. The Coda assassin Devin, refusing to go down quietly detonates a large explosive that destroys the entire club (This is the explosion recorded by Director Lynch in the beginning of the issue).

But Lynch isn't the only one monitoring the affair. From his submersible ship the Behemoth, Helspont watches the explosion with his Cabal agent B'lial. B'lial is actually a mole impersonating Vice President Dan Quayle.

Retrieved from "https://imagecomics.fandom.com/wiki/WildC.A.T.s:_Covert_Action_Teams_Vol_1_1?oldid=70430"
Community content is available under CC-BY-SA unless otherwise noted.