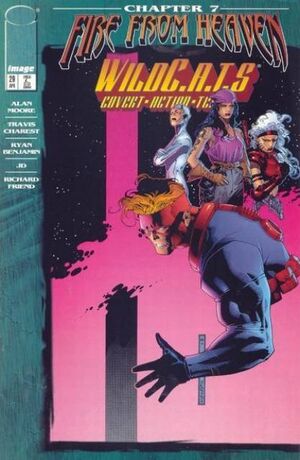 Appearing in "Fire From Heaven, Chapter 7 of 14"

Plot Synopsis for "Fire From Heaven, Chapter 7 of 14"

Grifter and Deathblow are standing outside Halo Inc. Grifter is glad that the 'CATs are back from Khera but he feels a distance from them now. He and Deathblow need to head to Gamorra to try and get their Gen-Factor back before they die. As they head into the building to say goodbye, Jacob Marlowe (Emp) comes out carrying a suitcase. He's in a bad mood--he says something about how he doesn't have a home planet anymore and walks off. Inside, Ladytron makes conversation with Void and Void is surprised to hear that Ladytron was an armed robber before being recruited into the new WildCATs.

Upstairs, Grifter and Deathblow board an aircraft while Savant tries to talk Grifter into staying while Tao observes. Savant argues that they are on the verge of a gang war and need all the help they can get, plus Grifter's brother Condition Red is in the hospital as a result of a bombing at Clark's Bar. Grifter says that their need in Gamorra is much bigger than their crime war, and he leaves. Savant is upset but says that at least the rest of the original 'CATs are back now to help.

A day later, in the present, Warblade and Maul discuss how things aren't the same since Khera. Voodoo arrives and announces she's quitting the team and leaving. They, along with Spartan, try to talk her out of it but her mind is set. She kisses Spartan goodbye and departs. Elsewhere, Majestic is shocked to hear from Zealot about the sham that is Khera, and that the Daemonite war is long ended. He's not sure what to do with himself now. Void teleports in and reports that Grifter has left for Gamorra. Zealot decides to go as well and help Grifter however she can. Savant and Majestic try to talk her out of it, but in the end, she and the rest of the original 'CATs board an aircraft and head for Gamorra. Savant isn't sure what they'll do about the crime war, but Tao assures her that his calculations show they won't need the original 'CATs. Plus, they have the Stormwatch rookies there to help them out. Savant is not convinced of their abilities, given their young ages and rookie status.

Ladytron heads to the infirmary to check on Condition Red, but learns that he checked himself out after telling doctors he had to get away from someone who had a crush on him that wasn't reciprocal. Ladytron is furious and blows a hole in the wall and runs off. Majestic intercepts her and convinces her to stay. They fly to an ongoing battle where Majestic's new 'CATs and the Stormwatch rookies are fighting rogue SPBs (pictured are Pike, Helmut, and some unknown villain with a shark's head). They join the fight, and Savant hopes that wherever the original 'CATs went, it was worth it.

Over Gamorra, the original 'CATs run into a lot of incoming fire. Spartan is jacked into the controls of their craft, though, and is able to evade the incoming fire. But then an armed troop carrier emerges from the clouds and they see it has the Stormwatch insignia on it, so they realize that the U.N. has been called into Gamorra. Maul and Voodoo repel boarders while Spartan tries to control their damaged craft. The craft descends and descends until it crashes into the ocean. On the shore, the crash is observed by a Hunter-Killer Daimyo and two of his soldiers. Daimyo is happy to be able to report to Kaizen Gamorra that more intruders have been taken care of. They leave, and then Void and the rest of the WildCATs teleport onto the island.

Retrieved from "https://imagecomics.fandom.com/wiki/WildC.A.T.s:_Covert_Action_Teams_Vol_1_29?oldid=63925"
Community content is available under CC-BY-SA unless otherwise noted.