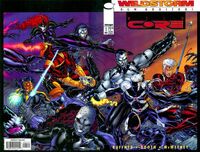 Wildcore was a comic book series created by Sean Ruffner and artist Brett Booth. It was published by Wildstorm comics, then still a part of Image Comics as a continuation of the series Backlash. The series featured the new superhero team Wildcore and lasted for 10 issues (plus a preview issue). After the series was cancelled the team's final story was told in the pages of Gen-Active, an anthology series.

The story of Wildcore starts in the pages of Backlash, where Marc Slayton (aka Backlash) and his girlfriend Amanda Reed (aka Taboo) work with the U.S. government's secret organisation Department PSI. Slayton had collected a group of superhuman agents to assist him in his missions, but at the beginning of Wildcore, many of these agents have left or are reassigned. As a replacement, Wildcore is formed to combat the alien D'rahn.

The D'rahn are an ancient enemy of the Kherubim and Daemonites, who have appeared again after millennia of absence and are planning on taking over the world and the galaxy. The D'rahn claim the Kherubim, their former allies, betrayed them and therefore went revenge on the Kherubim first and foremost. Backlash, being half-Kherubim, and Ferrian, a full-blood Kherubim, are both members of Wildcore, making Wildcore a primary target for the D'rahn. Department PSI-director, Antonio Giovanni, also hires Zealot, another Kherubim, who has experience fighting the D'rahn.

Zealot is sent to infiltrate the Norfolk Naval base, where General Gant resides. Gant as the leader of the Puritans (a group of humans who plan on eliminating all aliens on Earth) has a list with all suspected aliens on Earth. The D'rahn plan on obtaining the list so they can locate and strike against the remaining Kherubim on Earth. The Norfolk Naval base is protected by the Chasers, a group of superhumans, but when the D'rahn attack, the Chasers turn out to be no match for them. Zealot, Gant and the Chaser-leader Brawl survive the D'rahn's initial attack, but it turns out that Gant is in fact a Daemonite. Gant and his Daemonites make a deal with the D'rahn: they will serve the D'rahn and in return the D'rahn will spare them. The D'rahn then reveal their special ability, Enlightenment, which allows them to change a being into a more powerful version. The D'rahn enlighten Gant's Daemonites. Wildcore is sent in and they manage to delete most of the list, but ten names remain on it. Brawl joins Wildcore and the team sets out to protect the names on the list.

The first target is Guy Blackfoot, but Wildcore is too late. Blackfoot is killed and one of the D'rahn enlightens his fiance Alea, changing her into a superhuman. Meanwhile Zealot and Ferrian ask Mr. Majestic for assistance against the D'rahn. It is also revealed that the mage Azrum, part of Backlash former group in Department PSI, was asked by Giovanni to seek out the witch Tapestry, hoping to use her magic against the D'rahn. Azrum hasn't contacted them since, so Wildcore decides to go on the offensive; Department PSI has located the D'rahn's base and Wildcore attacks. They are joined by Majestic and he kills the D'rahn's leader, Typhon. The D'rahn retreat to regroup.

Wildcore goes to investigate Azrum's disappearance and find that Tapestry has captured him. Tapestry uses her magic to enslave Zealot and wants to reshape the world in her image. The other Wildcore members manage to interfere with the spell. Wildcore and Tapestry are now on a medieval fantasy-type world and no longer remember their past. Only Ferrian manages to regain his memory and he gathers his former team to oppose Tapestry. They succeed and return to Earth, but Styrian is killed and Geist follows them back to Earth. Zealot leaves the team shortly afterwards.

By 2001, Geist has joined Wildcore and Alea has become an active member. The team is sent to Antarctica to quell the riot in Purgatory Maximum Security Penitentiary (nicknamed Purgatory Max), a prison for dangerous superhumans; supervillain Baron Tödt (see notes) and his group, the Axis, entered the prison, killed all personnel and released all prisoners. Despite Taboo's bad feelings about the mission, the team enters the prison. The missions turns out disastrous: the inmates overpower the separated Wildcore-members and kill most of them. Taboo is saved by inmate Hangman, a prisoner who is seeking salvation. He warns her that the prison is about to explode. Backlash finds the explosives a second before they blow and is caught in the blast. Another inmate, former DV8-member Evo, who had been Hangman's cellmate, saves Backlash and takes him outside. Evo, Backlash and Taboo are all badly hurt and lose consciousness. Hangman congratules Evo on doing the right thing, activates Backlash's beacon and leaves. Department PSI arrives and finds five bodies, telling his subordinates to take them back to a hospital and that all others must have died. (see notes)

Crimson, now calling herself Jet, would go on to avenge her father and friends by looking for the escaped inmates and capturing them. Midnighter was asked to do the same by Jackson King and assists Jet for a while, but allows her to handle things herself as she wishes. Backlash would appear again in the pages of Point Blank and Sleeper without any of his teammates and with a bionic leg replacing the leg he lost in the Purgatory Max explosion.

Retrieved from "https://imagecomics.fandom.com/wiki/Wildcore?oldid=51933"
Community content is available under CC-BY-SA unless otherwise noted.