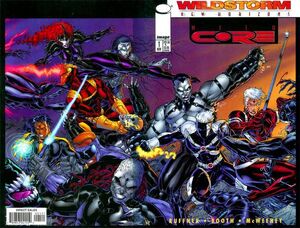 The issue opens on Wildcore using Taboo as bait to trap an SPB.

Gant has Zealot masquerading as his secretary, he also has The Chasers as his private Bodygaurds.

Using the access chip stolen for him , Gant is attempting to access the Behemoth and use its Daemonite weaponry to defeat the D'rahn.

The D'rahn arrive (Thanks to Haroth for keeping a secret) and quickly cut through the human defenses, also killing Homicide, Recoil and Gaze.

Brawl is discarded as the D'rahn enter the main control room of the base. Gant and Zealot are the only survivors left standing.

Gant is forced to reveal his true Daemonite identity. He is then granted enlightenment from the female D'rahn.

Wildcore is just given permission to attempt a rescue mission.

Retrieved from "https://imagecomics.fandom.com/wiki/Wildcore_Vol_1_1?oldid=53763"
Community content is available under CC-BY-SA unless otherwise noted.