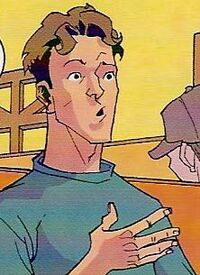 He is one of the people that know of Mark's identity as Invincible.[1] He is currently dating Rick Sheridan.[2]