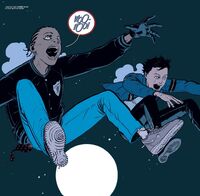 Marcus was a member of the initial team that warned Marcus at the parade and saved him from the police chasing him.[2]

Retrieved from "https://imagecomics.fandom.com/wiki/Willie_Lewis_(Deadly_Class)?oldid=23717"
Community content is available under CC-BY-SA unless otherwise noted.