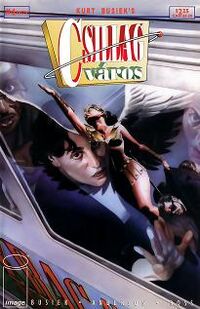 Winged Victory is a character in the comic book series Astro City. Created by writer Kurt Busiek and artists Brent Anderson and Alex Ross, Winged Victory is a prominent superheroine of Astro City, rather in the vein of more feminist interpretations of Wonder Woman. She is motivated by a powerful desire for social justice and self-sufficiency for women.

Winged Victory was an ordinary and apparently undistinguished woman who was granted super powers, and her mission of protecting and empowering women by a deity or other supernatural power. She has become one of Astro City’s most prominent and important superheroes. To date, neither Winged Victory’s original identity nor the name of her patron has been revealed. Her superheroic persona might suggest the goddess Nike (Victory) for the role of the patron.

Winged Victory is an independent heroine, eschewing membership in such high-profile superhero teams as Honor Guard as incompatible with her mission. She has, however, worked with other heroes and hero groups in the course of various cases, natural disasters, and other crises, and has even been romantically linked with Samaritan, Astro City’s greatest superhero. She has gone up against a colorful assortment of antagonists. In a sense she has actively participated in the formation of her personal rogues’ gallery by seeking out villains who prey on women as her opponents. Such recurring foes have included Fever and Goldenboy.

In her god-given role as a champion of women’s rights, Winged Victory has attracted controversy. Feeling a keen sense of mission, she is a vocal and passionate spokeswoman for the political, legal and social emancipation of women. In token of this, she is not an equal-opportunity heroine; when forced to choose among persons in a crowd to save first, her conscious decision is to save the females. She has established and maintained a number of women’s centers (originally shelters) and clinics, for which she has been stigmatized as a “cult leader” promoting ideological indoctrination of those served by them.

The most obvious influence on the Winged Victory character is Wonder Woman, as reimagined and reclaimed for an icon by the feminist movement. Their similar status as Greco-Roman themed heroines reinforce the resemblance. Her winged form, in contrast, puts her in a different superheroic lineage, exemplified by Hawkman, Hawkgirl and the Angel, although it is likely no coincidence that Astro City cover artist and character designer Alex Ross' interpretation of Wonder Woman in his seminal work Kingdom Come featured a suit of battle armour which included large golden wings. Busiek has noted that his character was in fact patterned after the famous Hellenistic sculpture the Winged Victory of Samothrace.

Retrieved from "https://imagecomics.fandom.com/wiki/Winged_Victory?oldid=64309"
Community content is available under CC-BY-SA unless otherwise noted.