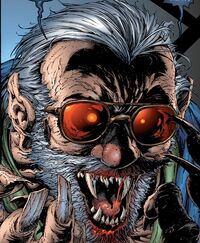 Wolfram is an undead walker. He bears the mark of Heaven and follows their orders loosely with a few interpretations he gets from his animalistic instincts.[1]

Wolfram attempted to abscond with a stripper into the night at one point. When Sam Burke and Twitch Williams inadvertently walked into the club as he was making his escape, they gave chase. In the alley, he dumped the dead body and began an investigation from the New York City Police Department.

Wolfram later attacked Spawn in the Dead Zone where his powers would not work. However, Boots stopped Wolfram and reminding him their orders were not to kill in the Dead Zone and that Heaven has a greater plan for Spawn.[2]

Years ago, Wolfram went rogue from his kind. He was soon chased by the Kingdom, a group of 777 heavenly vampires. Their leader, Simon Pure, found him in a bar and decapitated him leaving the bartender to find his body.[3]

His decapitated head was found in dumpster by Ab and Zab.[4] The head was brought to Spawn and Wolfram could still speak. He tells them the story of how the Kingdom came to be. He claimed he was a longer a part of it and wanted nothing to do with their plans of world domination. He informed them the only way to kill them, was to completely disintegrate or burn their bodies.[5] Spawn left Wolfram's head to battle the Kingdom members where all vampires were consumed in a fire.[6]

Retrieved from "https://imagecomics.fandom.com/wiki/Wolfram?oldid=66144"
Community content is available under CC-BY-SA unless otherwise noted.