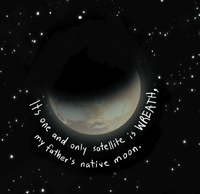 Hazel mentions that nobody remembers a time when Wreath and Landfall weren't fighting.[1] When the war between Wreath and Landfall began, it was fought in the general population, in cities within Landfall and Wreath, such as Landfall's capital. However, because continuing to fight would send one or the other into orbit, they began outsourcing to foreign lands. Peace was restored to the two original members of the war, but every other world was now having a conflict, every species being forced to choose a side -- planet or moon.[2]

Points of Interest for this location are unknown.

Barr (Before pursuit of Marko)

Klara (Before pursuit of Marko)

Retrieved from "https://imagecomics.fandom.com/wiki/Wreath?oldid=63974"
Community content is available under CC-BY-SA unless otherwise noted.