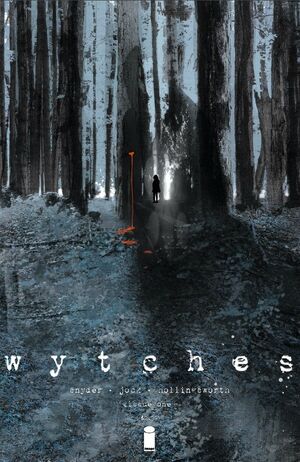 
Plot Synopsis for the 1st Story

Scott Snyder (Batman, Superman Unchained, SEVERED) and Jock (Batman, Wolverine, SNAPSHOT) will team up for a new, ongoing horror series called WYTCHES. Everything you thought you knew about witches is wrong. They are much darker, and they are much more horrifying.

WYTCHES takes the mythology of witches to a far creepier, bone-chilling place than readers have dared venture before. “I like taking classic monsters and reimagining them in a fresh, contemporary, and much scarier way,” said Snyder.

Add a photo to this gallery

Retrieved from "https://imagecomics.fandom.com/wiki/Wytches_Vol_1_1?oldid=53866"
Community content is available under CC-BY-SA unless otherwise noted.